Inspecting the unlikely success of Capital in the 21st century

Against all expectations an economics book became a best seller this year. I illustrate this unlikely occurrence with a true story.  One day in London I hailed a taxi near the Houses of Parliament (the workers of the underground system were on strike).  I mentioned to the driver that I taught economics at the University of London before retiring several years ago.  The driver asked me, have you read this book by a Frenchman named Piketty?

A London taxi driver discussing an economics book 578 pages long (text only) with countless graphics and even a bit of algebra qualifies the book as a “phenomenon” by the dictionary definition, “a fact or situation that is observed to exist or happen, especially one whose cause or explanation is in question”.  Very much in question the cause is.  I am in the process of writing a review of these 578 pages (plus the occasional excursion into a footnote).  At this point I limit myself to speculating over why it has swept all before it, especially since it is certain to be a book that many people buy and almost no one reads.

We find many reviews of Capitalism in the 21st Century (which I shorten to C21C), most from progressives, soft to hard left.  The inequality deniers have yet to launch a frontal assault, though a recent blog entry for the Financial Times by Chris Giles is a shot from that direction (see Piketty’s reply).  Prominent UK journalist Paul Mason succinctly dismisses the attempted hatchet job (here).

I think that the two best commentaries from progressives are by Tom Palley and Jeff Faux.  The latter is important for its discussion of the consequences of extreme inequality, following on from Faux’s latest book that is an excellent treatment of growing inequality and deindustrialization in the United States.  Palley’s raises the extremely important question of how progressives should respond to the phenomenally successful C21C given that its methodology, to the extent that it has one, is quite mainstream.  Palley concludes that on balance we should treat C21C as part of the progressive struggle against inequality and its causes.

Further to the left reviews have been less flattering, ranging from damning with faint praise to derisive.  David Harvey finds “much that is valuable” in C21C, but assesses its remedies for inequality as “naïve if not utopian”, which is an interesting comment from someone whose recent book includes in the title the phrase “the End of Capitalism”.  A repeated comment in commentaries by Marxists is that Piketty is not a Marxist, which is rather like complaining that the Pope is not an atheist.

Related to the “he’s no Marxist” criticism are objections to the title, which some view as pretentious, perhaps implying that it may be a latter day Das Capital (see Harvey).  If you have not seen the book, when you do you will find the word “capital” in very large print on the cover and “in the Twenty-first Century” very small.  The best interpretation of the cover is that it is pretentious.  This is not a criticism that progressives should stress given our tendency to do likewise (I plead guilty with mine).

Because I seem to be a much slower reader than others, my review lies on the horizon.  This does not undermine speculation as to why C21C threatens to break sales records for an economics volume that is not a textbook, an outcome that leaves me overtly envious.  If we should believe the rumours about sales, I would be extremely pleased if my new book, Economics of the 1% reached a fraction (very small fraction) of C21C.  There can be no doubt that the success came as a surprise to both author and publisher.  The last Harvard University Press book to each five figures in sales was John Rawls’ Theory of Justice, some forty years ago (1971, downloadable here).

The standard explanation offered for C21C success is that it represents an idea whose time had come.  Paul Krugman is especially keen on this explanation.  He believes that C21C will touch off or strengthen the movement to constrain inequality in the United States and elsewhere.  I fear that this optimism represents, as Samuel Johnson allegedly said of second marriages, “the triumph of hope over experience” (attributed to Johnson by Boswell).

After calling the timing of C21C “near-perfect”, Palley weakens this explanation by pointing out that, at least in the United States, we can find many books that document the rise of inequality, including at least two by James Galbraith than are considerably more readable than C21C (listed here).  It should also be noted that an important part of C21C derives from an article that Piketty wrote with Emmanuel Saez (who, somewhat ungraciously, C21C relegates to footnotes accept for two passing mentions in the text).  I show their graph below. 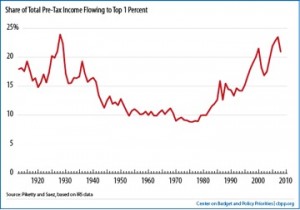 The “its time had come” explanation suffers from the problem of accounting for one thing we cannot explain (success of C21C) by something else we cannot explain (arrival of a propitious moment).  In the United States income and wealth inequality have increased continuously for three decades, so why did the magic moment come in January 2014?  A variant of the “perfect moment” explanation is the suggestion that C21C took off as a result of its endorsement by Krugman.  This would convince me if other books endorsed by Krugman had reached phenomenal sales levels, and I can think of none (see for example his review last year of three books on austerity none of which to my knowledge hit the Big Time).

I think that the C21C phenomenon results from the combination of growing concern in North America and Western Europe about the impact of income and wealth inequality (even from the political right), the broad consensus in the media for austerity policies, and Piketty’s tactics of presentation.  We frequently encounter media criticism and even outrage at the grotesquely large bonuses of bankers, excessive corporate profits and the extravagant life styles of the super-rich.

In contrast, the media shows no interest in challenges to the fiscal austerity doctrine.  To his credit Krugman has consistently trashed the arguments offered for deficit reduction both in the United States and in Europe.  Otherwise the anti-austerity position is almost entirely confined to web-based media that has a much smaller following than newspapers of or television.

I suspect — let me stress than I have never met Piketty, only heard him speak (see his Real News interview with Lynn Fries)  — that a tactical decision was made to avoid discussion of macroeconomic policy in C21C, as well as to avoid directly confronting political debates.  This interpretation draws support from Piketty’s membership in a group offering quite modest reforms of austerity policies of the European Union. Most of the previous exposés of inequality had overtly linked it to neoliberal policies of deregulation, especially in the financial sector.  Several years of constant and duplicitous attack on this obviously correct causality by the mainstream of the economics profession, rightwing to the core, drove it from public discussion.  So successful has been this counterattack that in the United States a majority of people believe that excessive public sector spending explains the lack of a recovery if not the crisis itself.

When listing the many shortcomings of C21C we should not include “naivety”.  Unless I am wrong, the decision was made to keep C21C narrowly focused on wealth inequality, while padding that discussion with countless diversions into cultural and historical commentary (dare I say “trivia”?). The goal was to stimulate debate over inequality rather than seriously deal with causality or policy.

That is not the way I would have written C21C, but – hey – it worked.  He put the inequality ball in play and now it is for progressives to score a goal with it. I think a step in doing that is to link wealth concentration to capital — corporations — rather than individuals. I can imagine a later-day FDR imposing confiscatory taxes on the mega-rich individuals – e.g., the unspeakable Koch brothers. But what do we do about the global mega-corporations? That would require a radicalism with a very socialist flavour.