Interview on The Fascist Nature of Neoliberalism

Editor’s Note: In this interview, Flavia di Mario answers questions about the book she co-authored with Andrea Micocci, recently published by Routledge. Sadly Andrea Micocci (pictured) passed away a month ago.

We at the WEA wish to convey our condolences to his family, friends and colleagues. 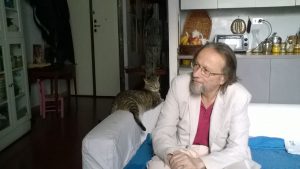 In our book we argue that contemporary capitalism is similar to, in its fundamental nature, fascist ideas and practices about politics and the economy. Our argument is based on the consideration that fascism and capitalism entail an organic view of society that characterizes by manifestations of metaphysical and mythical language the construction and affirmation of a “pensiero unico” (pensee unique, or single thought). Take “the regulating power of the market” locution as a specific instance and the demand for balance in the state budget. The practices of the “pensiero unico” are also particularly evident in the societal structure and organizations as in the case of managerialism of firms. We refer to managerialism as the ideology and force originated and used by managers to propose and to eventually affirm their superiority in organizing the factors of production, unquestionably imposing their practice to all industries and to all fields of society. The managerial caste does not need a democratic framework, much as the neoliberal technocracy, rather it self-legitimizes, acting in a ‘military-equals-management’ style. This ruthless attitude and oppressive character can equally apply to the nation-state administration, private airlines or a national electrical company. We offer historical and contemporary events that emphasize how the “pensiero unico” applies to the role of managers; the conceptualization of ethics and other horrific and repressive actions against forms of sociality that are not based on the standard capitalist state. In other words, our book emphasizes the relevant economic and political features of fascism in general in order to see its relation with neoliberal capitalism and managerialism.

This question allows me to address two core arguments in the book: the metaphysic of capitalism as maintained in Andrea Micocci’s previous works (2009/2010, 2016) and the “myth” in the contribution of Cassirer (1962). The theoretical basis at the origin of what we argue is based on the work of Micocci and contends that capitalism is based upon a metaphysic, an intellectual organization of reality that fits, and corresponds to, its own flawed intellectual mechanisms. The metaphysics of capitalism is an intellectual construction that reduces everything to a “capitalistic thing”; it pretends to provide “an ultimate system of meaning to reality” (Micocci, 2016, p.1) and to correspond to some natural tendencies. With Cassirer (1962), we agree that “myth” has survived in modern times. A “mythical” language spreads through the communication of concepts, ideas, hopes and collective feelings that would otherwise have neither rational nor factual origins. Drawing from this, we identify the foundation and functioning of neoliberal capitalism in the metaphysics and myth as describe above. Indeed, the metaphysics1 and myth replace sound ideas by the multiplication of vague capitalistic concepts. Concrete facts are restored by metaphysical and mythical language and narratives, evocation is practiced in place of definition.

Yes, State intervention has shown to be historically and presently a pillar of fascist ideas and practices. Historically, Paul Einzig (1933), recognizes in Hegel’s doctrine of the state the ideological grounding of fascism and imperialism. Presently we experience the fact that all State regimes call themselves liberal, whereas they carry out corporatism, a set of laws and controls. The practical implication is that, despite the new media communication in present day capitalism, most individuals and groups still have as their main reference the nation state; the masses are fully integrated in the political life of an organized, centralized, authoritarian democracy and its corporatism.

The alternatives can be constructed only outside capitalism as we know it against its homogenizing, corporative and repressive logic. In the book, a CEO’s speech is given as an example of the way in which the disrespect for human nature is an open, ordinary and fascist practice of corporate neoliberalism. To build alternatives, we must criticize the flawed intellectual reasoning behind the metaphysics of capitalism, and in particular in managerialism, which downgrades everything, including nature and human beings, to a price-market function. Here we express a belief in an alternative to contemporary capitalist metaphysics and mythical language, that is the hope to recover the material inside and outside ourselves. This means freeing ourselves of the metaphysics through a process of individual emancipation, which should consist of recovering the nature of our sentiments from the prevailing domination of the intellectuality of capitalism. The alternatives are constituted by radical arguments and practices, i.e., of theorizing and making revolutions and actions against the violence and prevarication of managerialism. See, for example, how the students and workers struggle in solidarity against the brutalities of corporate managers despite institutional and corporate forms of downgrading, retaliation and blacklisting. While we are talking, individuals are trying to construct relationships of solidarity outside the logic of capitalism, out of the State and the market. Take for example the communication outside the mainstream and “social” media systems. Other examples are the collective attempts for the re- appropriation of the lands, water, natural resources and public spaces, the creative and performing arts openly and freely displayed in the cities, the natural ways of farming, experimentations to switch from market-oriented production to socially oriented consumption.

Our book proposes to regard neoliberalism in its fascist nature to see beyond the academic and intellectual understanding that this view implies. Despite all the formal deprecations of the fascist ideology and practices in European democracies and elsewhere, the recent elections sought the rising and affirmation of fascist and Nazi groups that confirmed that they are not only compatible but synergic to neoliberalism. Populist and fascist groups are likely to continue the extensive use of mythical language and its absurd, nebulous and evocative concepts of community, nation, economic value, and patriotism. In our contemporary capitalism, the legalized forms of oppression operating in a fascist, and capitalistically banal manner will persist, eventually increasing by means of new technologies, especially when we come across the role and function of managerialism.

As said above, alternatives exist. Through an (inconceivable) uprising of people, new initiatives will be proposed. Their development depends much on the radical nature of these alternatives equally with the efforts to free ourselves and denounce the banalities and atrocities of neoliberalism, whether these are made by verbal or practical acts. People are reacting and denouncing the forms of control and repression, yet it is not enough. Positive changes are likely to happen in the future outside capitalism through the emancipation of people, the spontaneity of their sentiments and actions that must link the efforts to share aims instinctively from different generations.

Micocci, A. (2016), A Historical Political Economy of Capitalism: After Metaphysics, Routledge, London