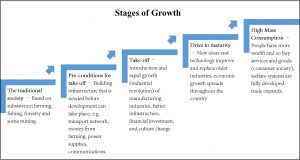 From the very beginning, the area of mainstream economics devoted to Third World development has been imbued with a utopian impulse. The basic idea has been that traditional societies need to be transformed in order to pass through the various stages of growth and, if successful, they will eventually climb the ladder of progress and achieve modern economic and social development.

Perhaps the most famous theory of the stages of growth was elaborated by Walt Whitman Rostow in 1960, as an answer to the following questions:

Under what impulses did traditional, agricultural societies begin the process of their modernization? When and how did regular growth become a built-in feature of each society? What forces drove the process of sustained growth along and determined its contours? What common social and political features of the growth process may be discerned at each stage? What forces have determined relations between the more developed and less developed areas?

Rostow’s model postulated that economic growth occurs in a linear path through five basic stages, of varying length—from traditional society through take-off and finally into a mature stage of high mass consumption.

While Rostow’s model and much of mainstream development theory can trace its origins back to Adam Smith—through the emphasis on increasing productivity, the expansion of markets, and the definition of development as the growth in national income—the development models that were prevalent in the immediate postwar period presumed that the pre-conditions growth were not automatic, but would have to be engineered through government intervention and foreign aid.

Mainstream modernization theory was created in the 1950s—and thus after the first Great Depression and World War II, when world trade had been severely disrupted, and in the midst of decolonization and the rise of the Cold War, when socialism and communism were attractive alternatives to many of the national liberation movements in the Global South. It was a determined effort, on the part of academics and policymakers in the United States and Western Europe, to showcase capitalist development and make the economic and social changes necessary in the West’s former colonies to initiate the transition to modern economic growth.*

The presumption was that government intervention was required to disrupt the economic and social institutions of so-called traditional society, in order to chart a path through the necessary steps to shift the balance from agriculture to industry, create national markets, build the appropriate physical and social infrastructure, generate a domestic entrepreneurial class, and eventually raise the level of investment and employ modern technologies to increase productivity in both rural and urban areas.

That was the time of the Big Push, Unbalanced Growth, and Import-Substitution Industrialization. Only later, during the 1980s, was development economics transformed by the successful pushback from the neoclassical wing of mainstream economics and free-market policymakers. The new orthodoxy, often referred to as the Washington Consensus, focused on privatizing public enterprises, eliminating government regulations, and the freeing-up of trade and capital flows.

Throughout the postwar period, mirroring the debates in mainstream microeconomic and macroeconomic theory, mainstream development theory has oscillated back and forth—within and across countries—between more public, government-oriented and more private, free-market forms of mainstream development theory and policy. And, of course, the ever-shifting middle ground. In fact, the latest fads within mainstream development theory combine an interest in government programs with micro-level decision-making. One of them focuses on local experiments—using either the randomized-control-trials approach elaborated by Abhijit Banerjee and Esther Duflo or the Millenium Villages Project pioneered by Jeffrey Sachs, which they use to test and implement strategies so that impoverished people in the Third World can find their own way out of poverty. The other is the discovery of the importance of “good” institutions—for example, by Daron Acemoglu—especially the delineation and defense of private-property rights, so that Rostow’s modern entrepreneurs can, with public guarantees but minimal interference otherwise, be allowed to keep and utilize the proceeds of their private investments.

The debates among and between the various views within mainstream development economics have, of course, been intense. But underlying their sharp theoretical and policy-related differences has been a shared utopianism based on the idea that modern economic development is equivalent to and can be achieved as a result of the expansion of markets, the creation of a well-defined system of private property rights, and the growth of national income. In the end, it is the same utopianism that is both the premise and promise of a long line of contributions, from Smith’s Wealth of Nationsthrough Rostow’s stages of growth to the experiments and institutions of today’s mainstream development economists.

The alternatives to mainstream development also have a utopian horizon, which is grounded in a ruthless criticism of the theory and practice of the “development industry.”

One part of that critique, pioneered by among others Arturo Escobar (e.g., in his Encountering Development), has taken on the whole edifice of western ideas that supported development, which he and other post-development thinkers and practitioners regard as a contradiction in terms.** For them, development has amounted to little more than the West’s convenient “discovery” of poverty in the third world for the purposes of reasserting its moral and cultural superiority in supposedly post-colonial times. Their view is that development has been, unavoidably, both an ideological export (something Rostow would willingly have admitted) and a simultaneous act of economic and cultural imperialism (a claim Rostow rejected). With its highly technocratic language and forthright deployment of particular norms and value judgements, it has also been a form of cultural imperialism that poor countries have had little means of declining politely. That has been true even as the development industry claimed to be improving on past practice—as it has moved from anti-poverty and pro-growth to pro-poor and basic human needs approaches. It continued to fall into the serious trap of imposing a linear, western modernizing agenda on others. For post-development thinkers the alternative to mainstream development emerges from creating space for “local agency” to assert itself. In practice, this has meant encouraging local communities and traditions rooted in local identities to address their own problems and criticizing any existing distortions—both economic and political, national as well as international—that limit peoples’ ability to imagine and create diverse paths of development.

The second moment of that critique challenges the notion—held by mainstream economists and often shared by post-development thinkers—that capitalism is the centered and centering essence of Third World development. Moreover, such a “capitalocentric” vision of the economy has served to weaken or limit a radical rethinking of and beyond development.*** One way out of this dilemma is to recognize class diversity and the specificity of economic practices that coexist in the Third World and to show how modernization interventions have, themselves, created a variety of noncapitalist (as well as capitalist) class structures, thereby adding to the diversity of the economic landscape rather than reducing it to homogeneity. This is a discursive strategy aimed at rereading the economy outside the hold of capitalocentrism. The second strategy opens up the economy to new possibilities by theorizing a range of different and potential connections among and between diverse class processes. This forms part of a political project that can perhaps articulate with both old and new social movements in order to create new subjectivities and forge new economic and social futures in the Third World.

The combination of post-development and class-based anti-capitalocentric thinking refuses the utopianism of Third World development, as it constitutes a different utopian horizon—a critique of the naturalizing and normalizing strategies that are central to mainstream development theory and practice in the world today. It therefore leads in a radically different direction: to make noncapitalist class processes and projects more visible, less “unrealistic,” as one step toward dethroning the “development industry” and invigorating an economic politics beyond development.

*At the same time, the Western Powers attempted to reconstruct the global institutions of capitalism, through the triumvirate of the World Bank, the International Monetary Fund, and the General Agreement on Tariffs and Trade (predecessor to the World Trade Organization) that was initially hammered out in 1944 in the Bretton-Woods Agreement.

***Building on a feminist definition of phallocentrism, I along with J.K. Gibson-Graham (in “‘After’ Development: Reimagining Economy and Class,” an essay published in my Development and Globalization: A Marxian Class Analysis) identify capitalocentrism whenever noncapitalism is reduced to and seen merely as the same as, the opposite of, the complement to, or located inside capitalism itself.