The evolution of economies

Joseph Stiglitz concludes one of his articles on asymmetric information with the comment:

Evolution means Darwin and natural selection. Attempts to develop an evolutionary theory of economics have consequently sought to adapt Darwin’s theory to the economic sphere. The transfer looks easy in terms of ‘survival of the fittest’. Species struggle for ascendancy in the biological jungle and people struggle for ascendancy in the economic jungle. But while species struggle in an impassive environment of biological law, the economic struggle seems driven by human volition and ambition. A more sophisticated approach takes the biological sequence ‘variation-selection-transmission’ and seeks factors in the economic world that might vary, be selected, and be transmitted. Veblen identified ‘habits of thought’ for this role. His followers have seen ‘routines’ and ‘rules’ as the variables that generate evolution. But routines and rules are difficult to portray as the drivers of an evolutionary process. They tend to stabilise activity, rather than change it. Veblen saw that ‘habits of thought’ could lag behind the times and inhibit change. It is difficult to explain actual historical economic evolution through changes in routines and rules.

Here, then, is a new attempt to provide an evolutionary economics, utilising the theory of support-bargaining and money-bargaining introduced to WEA members in Newsletter 2-6 of December 2012. Support-bargaining identifies a sense of individual insecurity as a primary psychological trait. To alleviate this sense of insecurity, individuals seek the support of others, thus creating groups. The ‘bargaining’ arises because individuals compromise as little as possible on their own opinions and behaviour in order to gain the support they need from the group. Support-bargaining gives rise to a process of cultural evolution, by which ‘money’ and ‘money-bargaining’ have been created. Both support-bargaining and money-bargaining are situation-related. People determine their interests and requirements by reference to their present circumstances. This gives a natural evolutionary dynamic. Societies evolve from situation to situation. The Evolution of Economies: Money-Bargaining, Economic Change and Industrial Revolution provides a clear account of the process.2 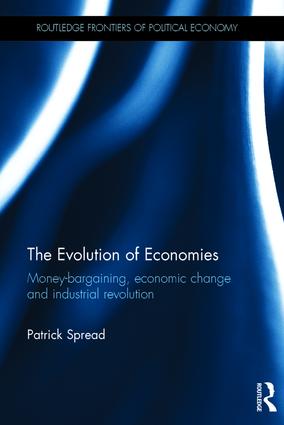 The evolutionary theory of support-bargaining and money-bargaining gives a new perspective on the old theory. ‘Intellectual support-bargaining’ is the process by which theories are developed in accordance with the situation and interests of the developers. All theory is ‘interested’. This is particularly apparent in the theory relating to foreign trade. David Ricardo developed his theory of comparative advantage in the context of his campaign in the British Parliament for repeal of the Corn Laws. He assumed a barter economy, in which advantages of comparative productivity would dictate production patterns. But in the context of a money-bargaining system, unit costs dictate which companies are ascendant. Weakness in productivity can be offset by adjustment to wage rates to give competitive unit costs. Furthermore, in an evolutionary system, advantage is never fixed. Companies evolve their formats in accordance with changing circumstances. The German economist Frederick List argued that British adoption of ‘free trade’ was no more than partisan cunning – as the dominant trading nation, Britain was bound to gain advantage from low tariffs. Post-war experience of international trade confirms the functioning of a money-bargaining system rather than the commitment to ‘comparative advantage’ and ‘free trade’ that is so prominent a part of mainstream rhetoric.

The idea of money-bargaining challenges also Keynes’s analysis of equilibrium levels of employment. Keynes defines involuntary unemployment, savings as the residual of income after consumption and the marginal efficiency of capital in reaction against or in the context of a ‘classical’ theory. But understood in terms of an evolutionary money-bargaining system, the definitions are misconceived. Economies do not function in the way Keynes portrays. Companies as bargaining agencies order their investment differently to the ‘firms’ of classical economics. Their formats incorporate technology as critical components. Keynes defines by reference to his ‘classical’ theory, and then treats the definitions as the real thing, so that they confirm his thesis. His comments on the ‘socialisation’ of investment seem reasonable in the ‘classical’ context, but are close to absurd in the context of evolutionary money-bargaining.

In spite of the manifest relevance of a theory of evolutionary economics to the observed functioning of economies, the existing evolutionary theories have had little impact on mainstream economics. They have failed entirely to turn mainstream economics into a new course. This failure must in large part be attributed to failure to provide the strong theory necessary to displace an existing theory that is so thoroughly institutionalised, propagating its misconceptions from generation to generation. That alone is justification for the presentation of a new theory of the evolution of economies. If the above ‘rings any bells’, it is hoped that those who hear them will investigate the new theory in depth. Stiglitz, no doubt, will be delighted to find his conviction substantiated in historical detail.