Unnatural science: The conflict between reason and ideology in economics and the other social sciences
Collected works of Claude Hillinger, Volume I 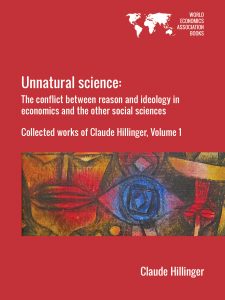 This book describes the many wrong turns that the social sciences have taken to arrive at their current dismal state. Most of the space will be devoted to my own field of economics, however political science, particularly the theory of collective choice will also be treated at some length. Though I agree with much of the criticism of contemporary economics, particularly macroeconomics that comes from the Left of the political spectrum, this and the following two books differ from the conventional critique in fundamental ways.

The first is that I define each wrong turn by contrasting it with what my view would have been the correct turn in the sense that it would have advanced the field in a positive direction. Thus unlike much contemporary criticism, mine is not purely negative – the negative is always contrasted with a possible positive.

Secondly, I do not concentrate on the past several decades that saw the rise of neoclassical economics along with neoliberal economic policies. Instead, I begin with the rise of classical economics and the works of William Petty and Adam Smith. The rejection of all economic theory that is, or has been in some sense mainstream, is in my view an act of non-constructive nihilism.

The topic of this book is how economics came to its present state. What were the valid ideas discovered along the way and why were they lost? What motivated the wrong turns along the way? What role did ideologies of various kinds play in this process? Serious students will find many ideas to challenge them.