In addition to publishing ebooks via this website, WEA Books has recently begun publishing physical books which can be purchased from the Amazon website. 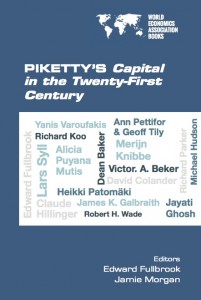 Piketty’s Capital in the Twenty-First Century

Thomas Piketty’s book Capital in the 21st Century has already attracted more serious attention than any economics book published in the last seventy-five years. This collection of 17 essays by some of the world’s most prominent economists explores Piketty’s book at depth and from various vantage points. Here is what economists around the world are already saying about this book.

“Marx’s Capital is strong on theory but, its detractors allege, weak on data. In a dialectic worthy of Hegel himself, the critics assembled here argue that Piketty’s Capital stands opposite to Marx’s, as strong on data but weak on theory. This combination–plus its exquisite timing–explains it critical acclaim. The juxtaposition of economic stagnation and obscene inequality in the aftermath of the financial crisis made it impossible for mainstream economists to continue ignoring inequality, let alone applauding it as they have done for so long. Piketty made it possible for them to acknowledge it without abandoning their comforting but false mainstream theories of capitalism. These authors in this volume applaud Piketty for his contribution to empirical knowledge, but reject his views on how this inequality came about. The true Capital for the 21st century is still yet to be written.”

“Neoclassical economics spawned a utopian belief in capitalism with unregulated market forces. Thomas Piketty’s empirical analysis has dealt a fatal blow to that belief by highlighting the recent huge redistributions of income and wealth to the ultra-rich. This raises a fundamental question for people around the world: How do we achieve a better world through economic policies? This global collection addresses that question and explores theoretical explanations for Piketty’s empirical findings.”

“Are the theoretical explanations proposed by Thomas Piketty of the rising inequalities valid? What is the meaning of his first and second “laws” of capitalism? This book is indispensable for anyone seeking answers to these questions.”

“By examining Thomas Piketty’s Capital in the Twenty-First Century from different angles, the 18 contributors to this invaluable book add enormously to our understanding of inequality and of policy options for reducing it. They point to the lack of a distinction between rentier income and earned income, to the severe limits of marginal productivity theory that Piketty employs and to the utopian nature of Piketty’s only suggested remedy.

“Piketty’s book Capital in the Twentieth Century served the cause of drawing the world’s attention to inequality under capitalism in the long haul, based on a fresh and innovative look at new evidence. This book serves that cause even better by focusing on the inadequacies of Piketty’s analysis of the processes and mechanisms leading to that inequality, and, therefore, on what needs to be done to address it.”

“Thomas Piketty’s Capital in the Twenty-First Century was the publishing sensation of 2104, focussing the world’s attention on the huge and continuing growth in inequality that poses a serious economic, political and social threat to us all. In this important new book, 18 economists from Europe, North America and Asia offer sympathetic but critical appraisals of Piketty’s theoretical framework, his empirical analysis and his radical policy proposals. This is not the last word on Piketty – whatever could be? – but it is indispensable reading for everyone who is interested in one of the most important challenges of our time”. 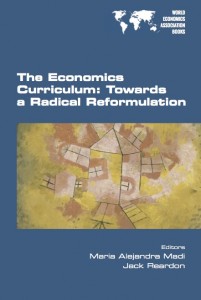 The Economics Curriculum: Towards a Radical Reformulation

This World Economics Association (WEA) volume – edited by Maria Alejandra Madi and Jack Reardon and supported throughout by Grazia Ietto-Gillies – originated with a successful WEA online conference (http://curriculumconference2013.worldeconomicsassociation.org). The volume has been conceived with current and future economics students in mind: they will be the economists of the future.

One of the main ideas underlining the book is that “being an economist” in the XXI century requires a radical change in the training of economists and such change requires a global effort. A new economics curriculum is needed in order to improve the understanding of the deep interactions between economics and the political forces and the historical processes of social change. The need for trans-disciplinary and interdisciplinary work is highlighted.

We hope the volume will stimulate further debate by both students and professional economists – whether academics or not – on how to progress towards an economics curriculum fit for the XXI century.