On the use and misuse of theories and models in economics 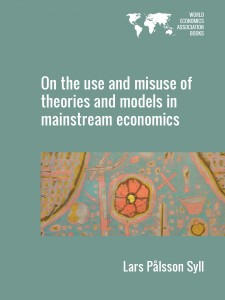 A wonderful set of clearly written and highly informative essays by a scholar who is knowledgeable, critical and sharp enough to see how things really are in the discipline, and honest and brave enough to say how things are. A must read especially for those truly concerned and/or puzzled about the state of modern economics.

Lars Pålsson Syll received a PhD in economic history in 1991 and a PhD in economics in 1997, both at Lund University, Sweden. Since 2004 he has been professor of social science at Malmö University, Sweden. His primary research areas have been in the philosophy and methodology of economics, theories of distributive justice, and critical realist social science. As philosopher of science and methodologist he is a critical realist and an outspoken opponent of all kinds of social constructivism and postmodern relativism. As social scientist and economist he is strongly influenced by John Maynard Keynes and Hyman Minsky. He is the author of Social Choice, Value and Exploitation: an Economic-Philosophical Critique (in Swedish, 1991), Utility Theory and Structural Analysis (1997), Economic Theory and Method: A Critical Realist Perspective (in Swedish, 2001), The Dismal Science (in Swedish, 2001), The History of Economic Theories (in Swedish, 4th ed. 2007), John Maynard Keynes (in Swedish, 2007), An Outline of the History of Economics (in Swedish, 2011), as well as numerous articles in scientific journals.