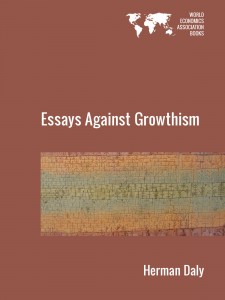 1 . The Economy as Subsystem of the Ecosphere

When I worked at the World Bank, I often heard the statement, “There is no conflict between economics and ecology. We can and must grow the economy and protect the environment at the same time.” I still hear that a lot today. Is it true? Is it possible?

Although it is a comforting idea, I fear that it is at most half true. The “true” part comes from a confusion of reallocation with aggregate growth. There are generally always possibilities of better allocation – more of something desired in exchange for a reduction in something less desired. This is the domain of microeconomics. Aggregate growth, by contrast, means more of everything as measured by GDP – it is the domain of macroeconomics, and is the meaning of growth in this discussion.

The economy is an open subsystem of the larger ecosphere that is finite, non-growing, and materially closed, although open to a continual, but non-growing, throughput of solar energy. When the economy grows in physical dimensions it incorporates matter and energy from the rest of the ecosystem into itself. It must, by the law of conservation of matter and energy (First Law of Thermodynamics), encroach on the ecosystem, diverting matter and energy from previous natural uses. More human economy (more people and commodities) means less natural ecosystem. In this sense the statement is false. There is an obvious physical conflict between the growth of the economy and the preservation of the environment.