Developing an economics for the post-crisis world 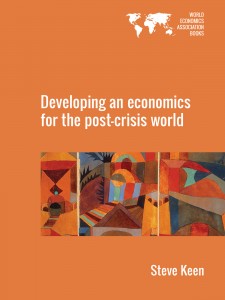 The veracity of mainstream economics has been called into question in the years since the economic crisis began. But the questioning of economics precedes the crisis, and not by merely years but arguably ever since 1898, when Thorstein Veblen published his brilliant paper “Why is Economics not an Evolutionary Science?” But Veblen’s critique fell on the deaf ears of the mainstream, and was unknown to the public. Only in the fringes of academic economists did Veblen’s words, and the spirit of rebellion he encouraged, live on.

Economics came under challenge again in the 1930s, and this time Keynes led the charge against an orthodoxy that, six years after the Great Depression began, had no idea what caused it, or how to overcome it. But Keynes’s challenge was largely deflected by Hicks’s reinterpretation of Keynes, and the taxonomic economics that Veblen hoped to defeat was rebuilt after the challenge of the Great Depression and the World War had ended.

In 2007, the global economy experienced its greatest crisis since the Great Depression, and once again, mainstream economics failed to anticipate the crisis, and even after it has apparently passed – in the Anglo-Saxon world at least – once again, can provide no explanation of why it happened in the first place.
What is different this time around is that there is a publicly accessible outlet for critical voices, and it has been around – in various guises – for 15 years. What was first known as PAECON (the Protest against Autistic ECONomics) and is now known as the Real World Economics Review was established by Edward Fullbrook in 2000 in response to protests by French students against the unworldly theorems they were forced to learn in the French economics curriculum. When the financial crisis hit in late 2007, the Real World Economics Review was already there, ready to provide an outlet for critical economists, and intent on getting their views to the public.

This short book provides the articles that I have published in RWER over the last fifteen years – starting with the first in July 2001. The topics covered include methodology, microeconomics, and the monetary approach to macroeconomics that I have been developing – along with many other non-mainstream economists – over the last 20 years.

This book is available to download as a PDF document.