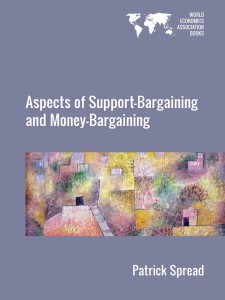 Neoclassical theory conceives a model in which rational choice gives rise to equilibrium with an optimal allocation of resources. Money-bargaining suggests the pursuit of situation-related interests, giving rise to an evolutionary process of exchange using money as a bargaining counter.

The idea of support-bargaining and money bargaining arose from dissonance between theoretical ideas encountered on the degree course in Politics, Philosophy and Economics at Oxford University and subsequent experience as a ‘working economist’ in London and overseas. The academic background to the theory was researched on a doctoral programme at the London Business School, resulting in the publication of A Theory of Support and Money Bargaining in 1984. In the ‘down time’ from various overseas assignments the harmony of theory and experience has been further established in books and articles. More recently, settled near Oxford, it has been possible to give full attention to the development of theory.

Patrick Spread is a maverick of the mavericks in the sense that although he offers an original approach to the study of economies, he does so without any of the obsessiveness and self-aggrandizement that often characterizes the writing of such authors.  That and, more importantly, the fact that Spread’s approach really does in a broad way increase our understanding of how  real-world economies do and do not work explain why his writing is now so in demand by major publishers – two books recently by Routledge and now this one by WEA Books.  Read Spread’s Aspects of support-bargaining and money-bargaining and you will be both wiser and pleasantly surprised.

Edward Fullbrook – University of the West of England