Appreciating Mental Capital: What and Who Economists Should Also Study 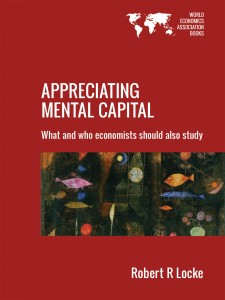 In Appreciating Mental Capital: What and Who Economists Should Also Study, Robert Locke sets straight the most famous case of historical falsification in economics – The neoclassical economists removal of the subject of mental capital from the lexicon of economic studies over which they had gained control by mid-20th century. He accomplishes this feat by returning to the origins of economic thought in the age of classical economics to rediscover, by broadening the analysis historically and geographically, especially to German economists, a thriving school of mental capital advocates persistently challenging the classical/neoclassical view of physical capital as the chief driver of technological expansion.

This is the meaning of the “Who” economists should study in the book’s subtitle.

In Chapter II he describes how the networks of mental capital changed between the first and second industrial revolutions to bring science and science-based technology into the Know-Who loops that permitted German mental capital to outstrip British and French in technological prowess in the period up to 1940.

In Chapter III, Locke shifts the emphasis on mental capital formation to its negative effects, especially in wealth distribution, after neoclassical economics and econometrics came to dominate the discipline in departments of economics and business schools in the 1960s. In this analysis he compares how the mental capital establishments in Germany and the US coped with two major economic events in the late 20th century globalizing economy: The Japanese challenge in manufacturing and the social-economic crisis invoked by the process of financialization.

In the first matter, he describes how the mental capital Germany inherited from the past dealt much better than the mental capital that reformed US business schools imbibed in the 1960s from neoclassical economics and econometrics, when confronting the Japanese manufacturing challenge. In the second he explains how US economists and their educational institutions, in theory, practice, and ideology provoked the financial crisis; by contrast, the communitarians values to which German mental capital subscribed, shielded the country from the worse effects of the mal-distribution crisis. No economist, Locke claims, can master his discipline, unless he/she understands the role the discipline plays in the sociology of the institutionalization of mental capital in the economy. They cannot learn that from economists, so they need to turn historian and study themselves.

I’ve been reading Robert Locke’s articles for a decade, and the issue he raises with regard to the economic role of education, culture and what many economists trivialize as “human capital” needs to be addressed to widen the concept of what economics is all about.

This short book does a fine job of setting forth the problem economics has with appreciating mental capital, explaining why economics has failed to appreciate it, and finally showing the very significant implications of those developments. As usual, Locke brings to the study a vast knowledge of the intellectual and institutional history of the developed nations. I appreciate that historical context and his fine analysis of the patterns of thought that led to the unfortunate results he enumerates.