A Philosophical Framework for Rethinking Theoretical Economics and Philosophy of Economics 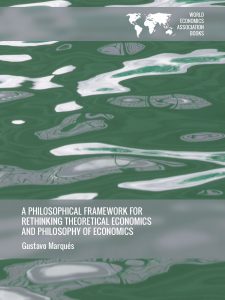 This book sets out to encourage a debate about the role that economic theory and philosophy of economics can play. Actually a good part of economics consists of theoretical developments which describe completely imaginary worlds and have no connections to actual market economies. This kind of practice may be called bookish theoretical economics, and may be irrelevant for approaching the main real economic problems. Traditionally epistemology has suffered the bookish orientation bias too. Mainstream Philosophy of Economics (MPE) has ignored or dismissed the many theoretical and philosophical problems arising from open-ended economic processes. It insists in treating them as lawfully or mechanistically commanded processes and strives to validate the epistemic relevance of bookish oriented models. Going beyond MPE means to incorporate into the agenda an analysis of the ontological features of economic processes, to call attention to the decisive role of the practice of lobbing, and to address such problems as rationality, learning and useful theoretical practice under uncertainty.

Against this bias, in this book the priority of the ontological realm is assumed. If the purpose of theoretical and philosophical analysis in economics is to make a contribution to find out how modern market economies work and which kind of theoretical practice will be useful for the implementation of successful economic policies, a shift both in philosophy of economics and economics itself is needed.

The relation between science and economics should also be rethought. An ample group of philosophers think that urgent economic problems can be solved with more knowledge (better representations, better models, more and better mathematical techniques). They also think that this knowledge can be obtained ex-ante (before taking policy decisions) and that the success of those economic policies depends on their quality. In the last chapters of this book I have argued why the idea of those authors who think that economics can be scientific (as much as natural sciences), and that such knowledge, once found, would solve those economic problems that the best theoretical tradition assigned to economics a long time ago (growth, employment and development) cannot be fulfilled. But as we try to show in this book economic actors (including the state) do not need a scientific theory able to guarantee their goals in order to intervene systematically upon the economy.  Instead they can be guided by feasible sequences as well as direct (practical) knowledge and skills to cope with the situation and push the process in the desired direction.

The Hayekean and Popperian programs for social sciences considered that their main task was to find out those not deliberately pursued (and often not wished) consequences of our actual decisions. This is the main program of Bookish Economics, which presupposes that laws or mechanisms acting on the back of individuals’ consciousness commanded economic phenomena in an independent and inexorable way. To back such approach is the main task of mainstream philosophy of economics. To this project I oppose a different one in which given open-ended and intervenible economic processes based on expectations lobbyers strive to contribute (often successfully) to attain (produce) wished consequences (those that are convenient for them). In fact, this is the whole point for the existence of lobby!

Our approach emphasizes the deliberate aspect of the interventionist behavior and the possibility that such strategy may be successful. That is to say, we find it feasible to enforce some wished results altering the relevant context or influencing the present decisions of other agents. If we are right, it is better to perceive social and economic sequences less as commanded by spontaneous or designed mechanisms than like open ended and intervenible processes constructed by the joint actions of the many mutually conflicting agents.

The last Part of the book extracts some philosophical consequences from the previous analysis and offers an outline of the way in which the practice in theoretical economics and philosophy of economics could be reoriented. It focus on some of the difficulties that arise in order to give sense to key economic concepts -like rationality, learning and test- when uncertainty is assumed. Particular attention is paid to the rationality assumption and some of the main arguments that have been offered to defend its legitimacy under conditions of uncertainty.

The shift proposed means that a scientific approach like the one assumed by the usual way of modeling can be of little use either for analyzing market operations or as a guide for implementing efficient policies. The nature of economic processes suggests that it would be far more useful to apply a political analysis able to reveal their open-ended nature and the diversity of economic interests at play than a supposedly scientific analysis which aspires to find invariant laws, mechanisms or regularities.

You will have the option to download this book in PDF format.

Arguing that mainstream theoretical economics has been a basically misdirected effort at creating and exploring imaginary worlds with little practical use, rather than focusing on developing instruments to understand and explain real-world economic phenomena, Gustavo Marques’ new book is a forceful plaidoyer for reorienting modern economics. The main purpose of theoretical economics should not be to explore the workings of imaginary model worlds, but rather to help us finding solutions to important real-world economic problems

Exposing the ungrounded pretensions of the mainstream philosophy of economics, Marques’ carefully argued book is a major contribution to the ongoing debate on contemporary mainstream economics and its methodological and philosophical underpinnings. Even those who disagree with his conclusions will benefit from his thorough and deep critique of the modeling strategies used in modern economics.

Is ‘mainstream philosophy of economics’ only about models and imaginary worlds created to represent economic theories?  Marqués questions this epistemic focus and calls for the ontological examination of real world economic processes.  This book is a serious challenge to standard thinking and an alternative program for a pluralist philosophy of economics.

In recent decades economists have focused heavily on the development and use of models. In this scholarly but accessible book Marques clearly describes the limitations of this approach and suggests alternative directions. It is a valuable addition to the armoury of anyone concerned about the nature of mainstream economics.

In this book Gustavo Marqués, one of our discipline’s most dexterous and acute minds, calmly investigates in depth economics’ most persistent methodological enigmas. Chapter Three alone is sufficient reason for owning this book.

Edward Fullbrook, University of the West of England