The continued relevance of neoclassicism and the mainstream 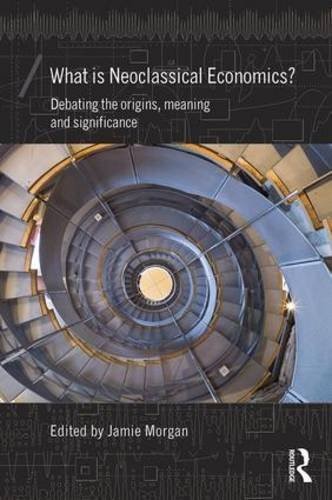 In some respects it seems odd that the term neoclassical still commands so much attention. It is a term that many mainstream economists now eschew, and one often hears that neoclassical economics is in the process of being superseded by more diverse approaches, encompassing also different methods: behavioural and info-theoretic economics, neuro-economics, use of field and natural experiments etc.. However, it is precisely because of the way in which neoclassical economics seems to be being superseded and the term seems to be falling out of use that makes it a subject of interest. This is because there can be dispute regarding the nature of continuity and change, which in turn affects whether ceasing to use a term means that the knowledge form to which it is applied has also disappeared. This is a subject that brings together the history of economic thought, methodology and philosophy. At the same time it is not a minor or marginal (no pun intended) matter of interest merely to historians as historians, and philosophers as philosophers. If some of the key characteristics of what we have named as neoclassical economics continue to be reproduced and transmitted, then there may be problematic limits to the way in which mainstream economics is developing, even as the term is shed.

So, the issue of what neoclassical economics is and has been, and the degree to which it can be said to continue to be influential, is something that should be of interest to all economists, and particularly those critical of the mainstream. It orients attention on the basic question: is economics changing to stay the same? In 2013, Tony Lawson applied his now well-known social ontology position to this basic question in the essay ‘What is this ‘school’ called neoclassical economics?’. He did so in a potentially provocative way. In 2006, Lawson published ‘The nature of heterodox economics’. In this essay he argued that heterodox economists were not simply defined by an opposition to the mainstream. They also shared (albeit often tacitly or implicitly) a critique of the mainstream commitment to deductive method, expressed typically in mathematical form, which in turn is rooted in a basically unrealistic (inappropriate) atomistic event regularity approach (though the form of this can superficially vary). In rejecting mainstream approaches (often in terms of theory or specific methods) it was this that heterodox economists were rejecting. Moreover, in doing so the alternative preferred (Post-Keynesian, ecological, Marxist, feminist, etc.) necessarily implied a contrasted approach. That is, one that was not rooted in atomistic event regularity. As such, heterodoxy could be defined as a unity-in-difference with a shared open system (complex historical processes) social ontology, but different theoretical concerns. And this could be contrasted with a mainstream closed system approach. However, the 2013 essay takes the argument forward in the context of the meaning of neoclassical economics.

Lawson argues that the term neoclassical is used in many different and often contradictory ways. As such, argument in its regard has become a distraction from the fundamental issue or contrast – open and closed systems and more or less realism in economics. Moreover, if one returns to the original meaning of neoclassical, as developed by Veblen, then one can also identify a basic problem of consistency that is as relevant for heterodox economists as it is for mainstream economists. According to Lawson, Veblen was using the term neoclassical at a time of apparent transition in economics. An old or taxonomic approach (equivalent to Lawson’s closed system) had dominated. Veblen’s own evolutionary approach (equivalent to Lawson’s open system) offered a recognizable way forward. However, many economists remained trapped between the two: recognizing the value of evolutionary economics, but unable to shed methods, assumptions and modes of thought that defaulted to the taxonomic approach. For Veblen, these were neoclassical economists – and the most articulate of them were J N Keynes and Marshall. According to Lawson, if one continues to apply Veblen’s concept of the neoclassical then many heterodox economists may actually be neoclassical, in so far as they tend to critique the mainstream but continue to rely on methods that are rooted in closed systems. With this in mind Lawson argues that it might be preferable to simply drop the term neoclassical from critique of the mainstream (and so bypass the confusion or dispute that currently exists regarding who is neoclassical and on what basis) in order to more clearly focus on the underlying problem and contrast – open and closed systems.

Clearly, Lawson’s essay could not be anything but provocative. Neoclassical is not just another word to economists. It is a word with history and with a personal history as lived experience for many heterodox economists. It carries connotations as well as denotations. Moreover, precisely because the term is already one rooted in debate and difference in terms of actual theory use, and then history of economic thought and methodology and philosophy, it is a term where there are already defined positions that can be brought to bear on any new contribution. As such, it was not difficult to collect together numerous responses to Lawson’s essay. These form the basis of What is Neoclassical Economics? Contributors cover a wide range from political economy, philosophy, Post-Keynesianism and more. Each provides some insight or development in regard of Lawson’s position, some supportive others more critical, covering some of the most well-known names in economics (though unfortunately, given the subject matter, not Yanis Varoufakis, David Colander or Geoff Hodgson).