A Critique of Samuelson and Nordhaus’s Economics 19th edn 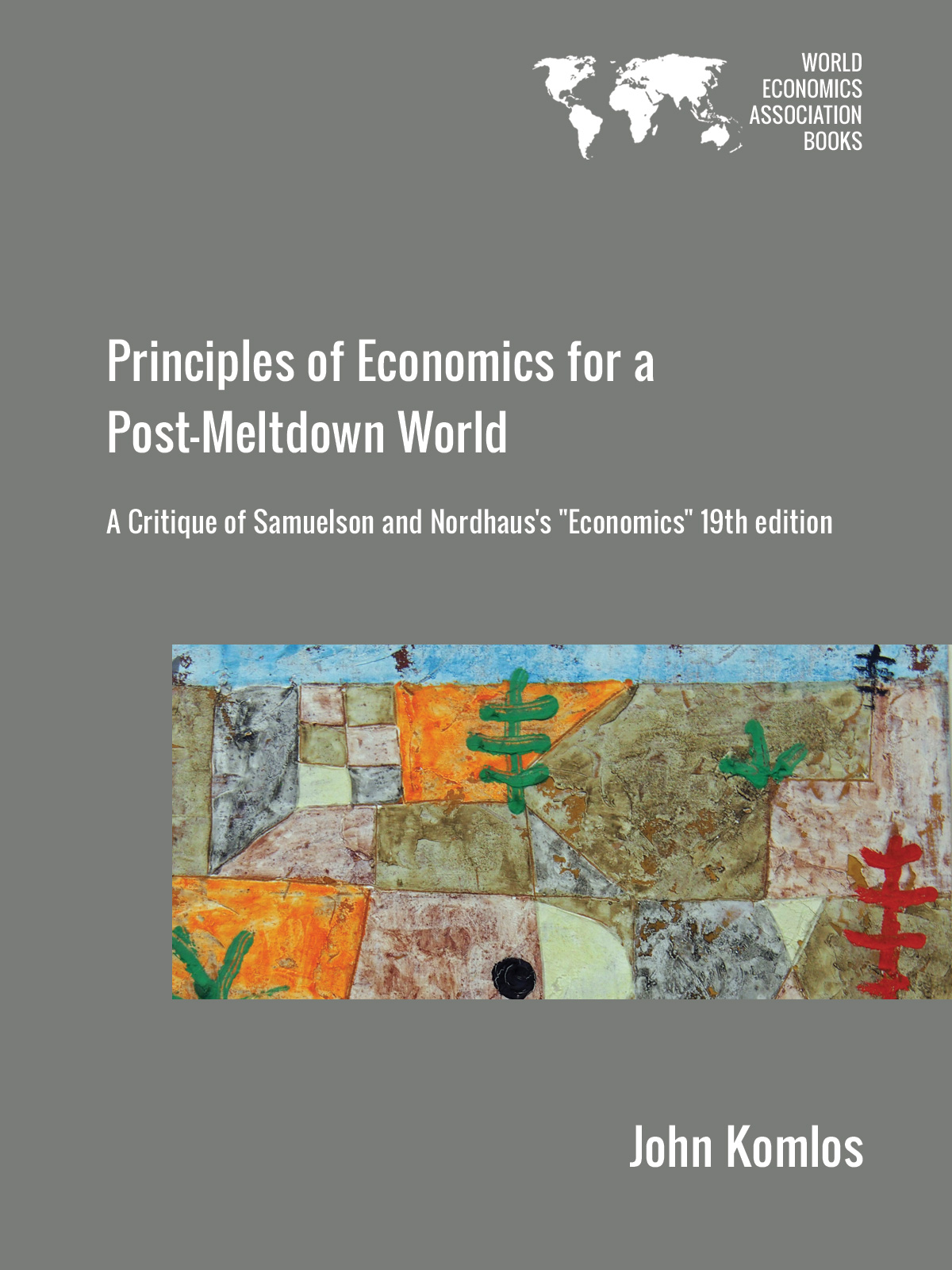 My main goal in this volume is to emphasize the ways in which introductory economics textbooks are misleading insofar as they sing the praises of free markets, keeping any demurrals muted. I am convinced that current principles books are inadequate for the post-Meltdown world and students know it, as evinced by such events as the walkout from Econ10 in Harvard and by the global Rethinking Economics movement. Actually, they are more than inadequate: they are misleading and hence “toxic” for a large number of reasons including:

These examples are not meant to be exhaustive by any means but illustrative of the many ways in which mainstream principles of economics textbooks distort our worldview with immense political and cultural consequences. Students of principles deserve a more complete perspective. Thus, my goal is to critique the conventional worldview and provide an alternative perspective. My version of free-market economics emphasizes that the human element should be paramount and moral judgments should override market outcomes to the extent these are not to the benefit of the common weal. In other words, what is important is not GNP as much as the quality of life. Not institutions but how people live and fare in them.

“A cool-headed analysis indicates that the minimum-wage debate centers primarily on issues of interpretation rather than fundamental disagreements on empirical findings.” (S&N p. 78)

The actual cool-headed analysis indicates that this is a sensitive issue that turns on ideology and on which model one applies to the problem. In their analysis, S&N use a perfectly competitive model without any imperfections (in their Figure 4.12, p. 79). Of course, that model is completely irrelevant to the current economy insofar as there are hardly any perfectly competitive markets left. Thus, an oligopolistic model would have been the correct model to use in their analysis.

Today the low wage employers are almost all oligopolies such as in the fast food industry or the “big box” stores such as Walmart, Target, or Lowe’s which  earn a lot of profits. In such an oligopolistic market an increase in the minimum wage comes out of profits and does not lead to unemployment. Hence, an oligopolistic model would have been called for.

S&N claim to be scientific and promised to tell the students the truth but instead they mislead and obfuscate at every turn to suit their ideology. This is an excellent example. The matter of fact is that: there does not have to be any inefficiency associated with the minimum wage at all. That is a myth. There may be, but it does not have to be. That makes a world of a difference. Their analysis of the minimum wage would be applicable to a perfectly competitive labor market and with full employment. Of course, if that were the case and the wage were increased the demand for labor would decline creating unemployment. But the last time we had full employment was in 1944! That was a long time ago. In other words, the model they apply is irrelevant to today’s economy.

Discussing price controls at a time of gasoline shortage S&N suggest that: “If the free market were allowed to operate, the market would clear with a price of perhaps $3.50. Consumers would complain but would willingly pay the higher price rather than go without fuel.” (S&N p. 80)

It is absurd to jump to the conclusion that consumers would be willing to pay the higher price without providing any evidence whatsoever to support that assertion. To be sure, some would be able to afford the higher price but others would not have the money to do so. Admittedly, the market might work better if incomes were equally distributed but that is far from being the case and as a consequence, the increase in the price of fuel would hurt the poor much more than it would the wealthy. Again, S&N show no sympathy whatsoever to the plight of the poor. As a matter of fact, there are no poor people at all in their models although there are no less than 45 million poor in this country, hardly a slight oversight.

S&N continue by suggesting smugly that politicians would “fret” about the high prices of gasoline. Yet, these are legitimate concerns, because at a time of national calamity it is not fair to have the rich more advantaged at obtaining gasoline than the poor for whom a rise in gasoline prices can be a painful development. Hence, the concerns of the politicians are legitimate. Letting queuing up for gasoline do the rationing is much more democratic in such an emergency, because time is the only resource that is distributed equally. In contrast, money is extremely unevenly distributed.

Obviously, letting market processes do the distribution in such an emergency favors the wealthy unduly unveiling the imbedded hidden biases of mainstream thinking. Hence, depicting government’s helping the poor as “interference” (p. 79) in the free market is a distorted interpretation of the problem. Price controls on necessities such as gasoline are legitimate in a market in which there is a skewed distribution of income, particularly if other policies to redress the inequalities are not open to the policy makers.