[Editor’s Note: A newly published textbook, Inside the Global Economy: A Practical Guide offers a broadly based perspective on the global economy. The Amazon description concludes, “Vonnegut enlightens readers on the people, behaviors, and institutions behind trade and investment flows in today’s globalized economies, and how they all contribute to the volatile and dynamic world we are experiencing.” Here the author describes his motivation and approach.] 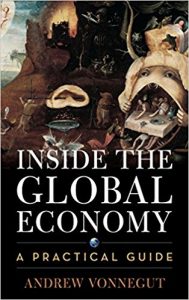 Then I returned to the United States, started teaching a global economics class, and looked for a text. Like my texts 25 years ago, materials were largely locked into a Samuelson definition and optimization framework, with full chapters devoted to expositions of and extensions on the Heckscher-Ohlin and Rybczynski theorems. The skirmish between mainstream and heterodox economics might have another dog in the fight, or at least one quietly lurking nearby: practitioners in need of useful information and frameworks. Unrepentant Laffer disciples aside, are practitioners driven outside the mainstream in a quest for actionable insight?

Learning the traditional optimization based foundations of the discipline can be beneficial, in particular for students continuing in economics. But, lots of people taking classes are not on an academic track, whether students in undergrad economics programs, business schools, global studies or public policy programs, or as journalists or just curious people. The latter are my students. They need to learn what the global economy looks like, start asking the right questions, and develop a basic, but broad framework for deriving and understanding the merits of different answers. They don’t need to graph the HO theorem. I did that, and it never helped me solve any problems.

So, like many other members of the WEA, I developed my own class materials (then turned them into a book). The themes that I hope will give students a useful background don’t seem anything but mainstream in the practitioner’s world, but many are left out of a traditional economics education. Here are some examples.

Economics is behavioral. Global capital flows are rooted in human behavior, where rationally solving objective functions is at best a start. Consider whether incentives and imperfect human decision making can contribute to global boom and bust cycles. Fund manager compensation is often based on performance relative to peers. Relentless performance pressure combines with the prospect of losses if late in or out of a market or asset class. Objective measures of evaluation, to the extent they exist, can be overcome by market momentum and fear. If emerging markets debt (or CDOs) looks risky but it’s driving your competitors’ returns, you get in or risk your job. Early poor risk assessment or reassessment leads to more risk as investors continue to pile in. That’s clearly not a complete framework, but it’s one direction worth considering that rarely ends up in an economics course. In the book’s exposition on financial contagion and its myriad channels through the global economy, some of the language is better suited to a psychology or sociology text. Economists should not be apologetic about, or criticized for, that.

Institutions and incentives matter. Domestic policy and central banks are unusual topics for a global economics course. However, as Mohamed El Erian notes, central banks are “the only game in town.”1 Modern global capital flows are at least partially the product of central bank policy mechanisms, along with their incentives and the translation of the policy mechanisms into investor incentives, intentionally and unintentionally. Another chapter (honestly, tediously) defines the public, multi-lateral, and private participants in the global economy and their roles in driving incentives. After graduating, my fellow economists and I didn’t know the difference between a commercial bank, an investment bank, the BIS, and the World Bank. People should know that after taking a global economics class.

Channels and flows are not mechanical. Central bank policy levers are a case in point. Policy interest rates act or don’t act on multiple economies through multiple, complex channels, not all of which may be active at any given time or set of conditions. The idea that lower policy rates in one economy can have multiple effects on an economy or group of economies, not all of which are stimulating and/or inflationary, is not a radical notion. Yet, most current treatments gloss over the channels and important potential diversity of intended and unintended consequences.

Domestic policy and political economy drive global capital flows. Tax incentives, procurement, and regulation are major money movers in the global economy. Case studies on EU energy subsidies, US fracking, Chinese and Japanese infrastructure programs, US ethanol programs, and others highlight the deep effects on global capital flows. Also, one should not shy away from whether domestic elites and entrenched interests play an outsized role in determining policy direction and consequent global money flows. Analysis here may shed as much light on the future as traditional econometric forecasts.

Last and most important, economics is (or should be) humble and inquisitive, not prescriptive and overly secure in its conclusions. The global economy is a chaotic and complex place. Embracing that makes economics less confident and “sciency,” but more useful, and fun. Outcomes are uncertain, but by understanding the participants, their incentives, economic history, human psychology, current stocks and flows and other variables, we can try to credibly make sense of things. The second section of the book is fun to teach. Five potentially disruptive global trends are laid out: demographic change; ecological change; technological change; shifts in income and wealth distribution; and emerging markets’ increased share of global wealth. The class then analyzes a series of scenarios related to those trends, discussing contributing and mitigating factors, risk, probabilities, and ways to benefit or mitigate downside risk.

Summing up: why even a conflict between technical orthodoxy and useful methods? The conflict is moot in the real world. Even in those bastions of technical correctness, central banks, practitioners recognize technical limitations. Ben Bernanke famously noted that QE works in practice, but not in theory.2 Allan Greenspan proclaimed, “we will forever need to reach beyond our equations to apply economic judgement.”3 But, where does that judgement come from and how is it taught and learned?

The profession’s hesitation is perhaps understandable. Debreu’s Theory of Value is a brilliant, technically perfect work. Something is proven at the end. The profession desires to maintain “rigor” and a grip on conclusions that can be arrived at through a series of mathematical steps. Other approaches can lack rigor and result in a dangerously slippery slope indeed. But the world is a slippery place and the global economic environment does not support the application of Debreu-type rigor. The idea that policies can have different outcomes at different times in different economies and we may not even fully know what those are, should be one of the fundamental precepts of economic instruction.

I didn’t set out with a radical, alternative agenda, but wanted to teach my students what one uncertain guy thought might benefit them. Time may eventually tell if derivation of the HO Theorem would have served them better.

El-Erian, Mohamed A. The Only Game in Town: Central Banks, Instability, and Avoiding the Next Collapse. New York: Random House, 2016.

3 Greenspan, Alan. The Map and the Territory: Risk, Human Nature, and the Future of Forecasting. New York: Penguin Press, 2013.