A Macroeconomic Theory of the Open Economy

This chapter can be hard to follow. It can be helpful to consider this note on models and assumptions, where I use this chapter to indicate how you can identify assumptions in the text. This may to help to clarify the processes Mankiw uses to analyse the issues. Consider the steps:

a) make some assumptions (about what will be important components of the structure to be developed). These may or may not be realistic, but once they are set out, the analysis has to comply with them.

b) construct a model based on these assumptions. A formal model involves the specifying of relationships between variables.

(Some of the assumptions may be used to justify the relationships, but they are not then essential to the analysis. For example, a case could be made as to why a supply curve slopes upwards, but for the use of the model it is enough to require the supply curve to be upward sloping.)

c) given the model, various conclusions can then be determined. This requires internal consistency in reasoning. The model is defining the “world” in which the conclusions follow.

d) there is no requirement that the conclusions be relevant for the real world, but they are sometimes asserted to be. At this stage it is important to remember that we are using a simplified structure which MAY serve as a useful analogy, but it may also be highly inaccurate. There are many additional “reserves, qualifications and adjustments” that we may have to make if we are to have any confidence in the real-world relevance of the model. Hence, for example:

This gives a framework to analyse the content of the chapter. The open economy macroeconomic model can then be summarised as follows:

This sets out the basic structure. You need to know it if you are to use the model. There is then a crucial diagram. See the three graphs in Figure 4. They are repeated in three different applications in Figures 5, 6 and 7.

Note Mankiw’s three steps in Chapter 4 subsection 4b, paraphrased here to refer to a range of static models:

Note that the model describes various relationships in the curves themselves, but each curve can be a function of a range of other variables. It is a change in one of these other variables that causes a curve to shift. Mankiw is selective in choosing which curves shift in response to some chosen event (a budget deficit, an import quota, capital flight due to political instability). A story can be told based on the model, but it is constrained by the variables that are allowed and the relationships that are permitted. The real world can be very different. Consequently the model may serve as an analogy, telling a story that is consistent with the evidence presented, but there may be other consistent stories, some of which may be more plausible.

Consider the Mexico example. First, if there is political instability, would this lead only to capital flight, or might it result in (a) people wanting to save more; (b) reduced investment; and (c) falling output and demand and increased unemployment? If so, other curves will shift and the assumption of GDP being fixed at full capacity output will not hold.

Consider also the China example. The model only considers some of the relevant factors. Here is a graph of China’s current account balance: 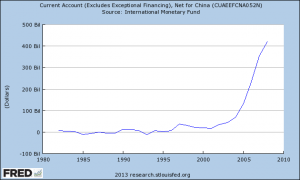 Note that the current account balance has been low, and sometimes in deficit for much of the time. It is only recently that it has become strongly in surplus. Consequently the net capital outflow is also a fairly recent phenomenon. China is a major economy that is in the process of establishing economic links with the rest of the world. It is inevitable that there will be major capital flows across borders in this process. Is the increase in the net outflow then a result of a change in outflow from China, or a drop in inflows from the rest of the world? Direct foreign investment into China has been very significant as much of the world’s manufacturing production shifted there. The global financial crisis resulted in a major slowing of this movement and may be a large factor in the growth of the net outflow.

Is the outflow part of a Chinese government strategy? The government has imposed restrictions on private capital outflows, but these are largely being circumvented. It is hard to accurately measure the resulting flows (and the quality Chinese economic data in general has been questioned). Capital flows from China to the rest of the world may in part be due to justified private investment decisions and part of a global economic rebalancing to reflect China’s new position.

These dimensions do not appear in Mankiw’s model, but they may be important for explaining this phenomenon.