Review: The illusion of value-free economics 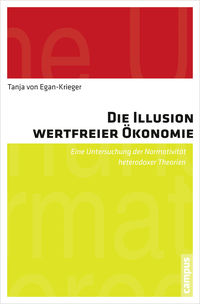 Von Egan-Krieger does not cover all heterodox schools of thought in her analysis. Her emphasis is on feminist economics, old institutional economics and ecological economics. The terminology used suggests that there is an ideological element involved in the engagement or commitment of those who advocate specific theoretical perspectives. Feminist economics suggests that there is a concern for the position of women in the contemporary economy, a concern which is not well considered by mainstream advocates. Similarly, ecological economics is for many of us as much an ideological as scientific reaction against mainstream attempts to deal with environmental or sustainability issues, for example climate change.

But Tanja von Egan-Krieger rightly has observed that there are mainstream attempts as well, to cover the above mentioned fields and concerns. Household economics with Gary Becker, New institutional economics with Oliver Williamson and environmental economics with Joachim Weimann and Ulrich Hampicke as two of its representatives in the German speaking world. Also these extensions of neoclassical theory are critically commented on by von Egan-Krieger.

In the first part of the book the author points to discursive ethics as her frame of reference. She also constructs a scheme of analysis in commenting upon and criticizing the various schools of thought. This “raster” or template is then applied to orthodox economics as well as the different heterodox schools. To make her analysis manageable Egan-Krieger has selected a limited number of texts to represent the heterodox schools. Adelheid Biesecker is representing the feminist school, Marc Tool and Geoffrey Hodgson are chosen for old institutional economics and finally Herman Daly and the present reviewer as typical among ecological economists.

If economics is political economics, then economists have to move away from technocracy to respect normal imperatives of democracy. This suggests that it is not compatible with democracy to give a monopoly to one single paradigm (with connected ideological orientation). A degree of pluralism then becomes the natural state of affairs.

The overview presented by Tanja von Egan-Krieger is clarifying in many ways. If ideology is involved, then we should not be afraid of the existence of many schools of thought. In each of the fields discussed there are tensions between neoclassical versions and perspectives where neoclassical theory is kept at a distance. When I first heard Oliver Williamson present his so called “new institutional economics” at the Department of Economics, Lund University, I made the remark that it was confusing to present his version of economics as “institutional”. There already existed a school of institutional economics which differs considerably from Williamson’s neoclassical story about transaction costs. Williamson did not reply to this comment.

In a short review, it is not possible to do justice to all parts of this excellent study. Tanja von Egan-Krieger is herself a political economic person with specific value or ideological orientation. But in her comparative analysis, she has respected ideas of democracy by listening carefully to many voices. And to make it easier for people outside the German speaking community to listen to her voice, an English translation of the book would be desirable.