The Irish anomaly. Rethinking the concept and operationalization of ‘Gross Fixed Capital Formation’

Summary. The 2019 Irish rate of Gross Fixed Capital Formation (GFCF), commonly known as ‘fixed investments’, was extreme. While a rate of 20 to 25% of total GDP expenditure is common, the Irish rate was over over half of total GDP expenditure (other items are for instance consumption and non GFCF government expenditure). This article will argue that this extreme rate was caused by an artefact of the recent change of the formal operationalization of GFCF in the national accounts, in combination with the position of Ireland as an international hub for property and profit shifting by multinationals trying to minimize taxes. The Irish data surely capture an important development, as also noticed by Irish national accounts statisticians. But it seems wrong to classify this rather unique development as GFCF. It might be better to roll back the recent conceptual change of the national accounts and to introduce a new variable to measure the property and profit shifting development mentioned above (suggestions for an apt phrase to capture this are welcome). This will enable an easier and more clear-cut interpretation of GFCF as well as the property and profit shifting behavior of multinationals. 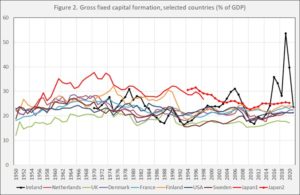 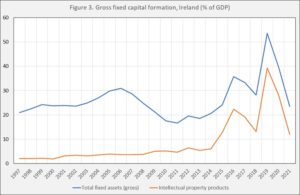 “The following types of gross fixed capital formation are distinguished:

(2) other buildings and structures; this includes

(3) machinery and equipment, such as ships, cars

(6) costs of ownership transfer on non-produced

(7) R&D, including the production of freely available R&D. Expenditure on R&D will only be

treated as fixed capital formation when a high level of reliability and comparability of the estimates by the Member States has been achieved;

“Intellectual property products are the result of research and development, investigation or innovation leading to knowledge, use of which is restricted by law or other means of protection. Examples of intellectual property assets are: (a) results of R&D; (b) results of mineral exploration, measured as the costs of actual test drilling, aerial or other surveys, transportation, etc.; (c) computer software and large databases to be used in production for more than one year; (d) entertainment, literary or artistic originals of manuscripts, models, films, sound recordings, etc.” while the value of the assets includes fees paid to a former owner.4 Note that R&D as well as its results are classified as GFCF. Including intellectual property and Research and Development in the concept and operationalization of GFCF was not the only change. The ESA 2010 also included purchases of military equipment in investments GFCF, too, while related changes were made to the concepts of public consumption and the like. A detailed overview of the changes plus the consequences for the Greek national accounts is provided by Bragoudakis and Papadogeorgis, showing that, generally, changes were for Greece, compared with estimates based on the earlier ESA 1995 manual, not inconsiderable but also not dramatic.5 The average level of Greek GFCF increased by 0.8% (while the sharp decline of GFCF after 2009 was, if anything, underscored when using the new concept). For Sweden, a high ‘Research and Development’ country, it led to an upward revision of GFCF of around 4.5%-point (figure 4), which is quite large, but still way below the Irish level. So, what was special about Ireland? 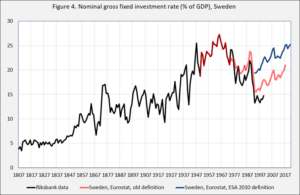 NFC stands for Non-Financial Companies, CoE stands for Compensation of Employees while Dom NFC GOS and Foreign NFC profit stand for the amount of profit (billions) earned by domestic and foreign companies. It can be seen that wages paid (total) by foreign owned companies are much lower than wages paid by Irish companies while the opposite holds for profits. At the same time (not shown in this graph but in the article) the investment rate of foreign companies is way higher than the investment rate of domestic companies. About this the Irish statisticians state: “This … has been driven by foreign-owned NFCs moving intellectual property (such as patents) to Ireland, usually as an company here purchases it from another company in the group.” The question remains how this was financed. The answer is simple. To quite an extent, intra-company payables and receivables were used. An example: Microsoft USA sells its patents to Microsoft Ireland by accepting the IOU emitted to Microsoft USA by Microsoft Ireland. It’s that simple. As profits are channeled abroad, this leads to ever more indebtedness of the foreign owned companies in Ireland (figure 6). Despite their very high profits and profit share foreign owned companies in Ireland become ever more indebted.

Figure 6. Net financial worth of domestic and foreign corporations in Ireland

So, what to do? Clearly, on the one hand something interesting is going on which indeed should be captured by the national accounts. But on the other hand, present developments in Ireland disable the traditional reasons to distinguish CFCF, or fixed investments, as a distinct category in the national accounts. Inter-company international shifting of property titles, financed by issuing ‘payables’ by in this case the Irish part of the company which are accepted as ‘receivables’ by the USA part is a financial transaction, not fixed investment. The simplest but not simple way to deal with this is to reclassify these kinds of transactions as financial transactions and financial assets instead of ‘real’ transactions and fixed assets. The main reason to trade them is to shift wealth and financial claims from one country to another, not to boost productive capacity. Research and Development should however not be reclassified and should stay included in GFCF. This would, however, necessitate to an imputed account of ‘Research and Development capital’ not tied to ownership of patents – which is not that easy.

A more complicated solution might however be warranted. The national accounts are exactly that: national accounts. It’s complicated, but it would be nice if these are complemented with accounts showing shifts and changes in international property relations of large companies. The consolidated total international value of patents, 3.not the country where ownership is registered, would become paramount for productivity analysis. Even when information on taxes and wages will be national. Together, this would enable a clear analysis of the influence of profit shifting on international financial flows.