I recently came across an ambitious book titled “Economy Studies: A Guide to Rethinking Economics Education” (Amsterdam University Press, 2021). The book, authored by Sam de Muijnck and Joris Tieleman, has a rather rich and relatively complex structure tackling different aspects of both the economics discipline and economics education. 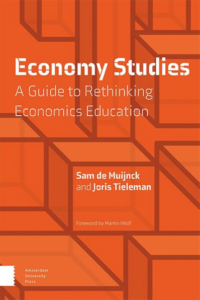 As is stated in the introductory summary, the development of the book was informed and influenced – among other things – by the groups of students and student movements asking for pluralism in economics as well as for the establishment of more pluralist curricula in economics, for instance:  Rethinking Economics, Netzwerk für Plurale Ökonomik, the Institute for New Economic Thinking (INET), International Student Initiative for Pluralist Economics (ISIPE), International Confederation of Associations for Pluralism in Economics (ICAPE), Diversifying and Decolonising Economics, Economists for Future, Reteaching Economics, and Oikos International. These are groups that came together “for dissent, discussion, self-education, action, campaigning, disseminating ideas and engaging with wider audiences” (p. 10) and which appear to have influenced this book.

Instead of writing a usual book review, I asked Sam de Muijnck and Joris Tieleman to briefly present their book to our readers. For this purpose, I provided them with three questions related to the writing process, the contents of the book and the desired outcomes. 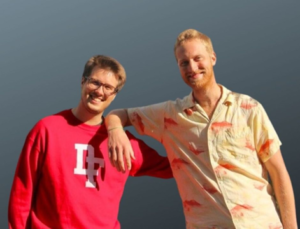 1) What are the leading ideas and the main insights in your book?

The growing societal importance of economists and economic ideas has sparked a lively debate around the content and structure of economics education. A worldwide movement of students and academics calls for more pluralist, real-world focused and socially relevant programmes that would enable economics graduates to better understand and tackle the economic issues that the world faces today. This movement has accelerated over the last decade, spurred on by the global financial crisis of 2008, the climate crisis and the COVID-19 pandemic.

However, what has been missing so far in this renewing economics movement is an integral approach for constructing economics curricula and courses. The Economy Studies project aims to fill that gap. We bundle the ideas and materials of renewal and reform into a coherent multi-level vision for economics education, its overarching structure, its goals and its principles. We also provide ten concrete building blocks for this in terms of academic content, including detailed overviews of teaching materials and practical suggestions. Finally, we translate these to the level of actual programmes and courses, providing a wide range of practical tools for implementation.

2) When did you decide to write the book and how did the writing process develop?

The story of Economy Studies is inseparable from the international student movement Rethinking Economics. Over the past decade, Rethinkers have pointed out gaps in the curriculum, argued for different material and conducted thorough curriculum reviews. Many staff members and faculties turned out to be quite interested in our proposals. Still, they generally found it hard to implement such requests, being so used to the familiar curriculum. Hence the idea germinated in Rethinking Economics meetings to make an example curriculum.

We did not want to reinvent the wheel, but rather assemble the best work from the generations that came before us. So, we reached out to a wide range of seasoned academics around the world, hoping to tap into their collective knowledge and wisdom.

In the first round, before starting our own writing process, we simply asked this group of seasoned academics a few open questions. How would they define the economy, what should the core principles of a good economics education be, what courses or programmes did they find inspiring, and what it was that made these courses and programmes so worthwhile? These responses, together with many pages of notes from Rethinking Economics gatherings, would form the basis of our new curriculum proposal.

Overwhelmed by the breadth and depth of the responses, we have continued this practice throughout the writing process: three times in total we reached out again to the same group of seasoned academics. In the process we got feedback and input, often very detailed, from more than 150 economic professors worldwide. At the same time, a group of about twenty rethinkers edited one chapter per week per person for about two months, ensuring that every chapter would pass through many pairs of eyes and hands.

We quickly realised that it would be impossible to write ‘the perfect curriculum’. Rethinking Economics is at its core a movement for pluralism, and does not intend to replace the current, relatively standardised curriculum with a single alternative. This does not mean that we do not have a coherent view. It just means that it encompasses diversity of theories, methods, values, people, and programmes. We agreed, however, on the major gaps in current programmes, the basic tenets for future programmes, the design principles, and on the general direction we envision for economics education.

This, we decided, would be the form of our curriculum proposals: a modular, open-ended design toolkit built on a clear foundation of guiding principles. The core: teach students to study the economy using a broad and open-ended toolkit, rather than drilling them in a specific manner of thinking about it. Such a modular approach has two advantages. For its writers, it allowed for a collaborative and diverse yet coherent vision to emerge from a broad reform movement. For its users, it offers a menu and a variety of tools, rather than a fully formed ‘take it or leave it’ alternative structure.

3) What is the desired impact of the book? Who and why should read it?

If you are working with an economics curriculum, whether teaching it, learning it or trying to reform it, this book could be for you. The different sections have been designed to be read independently, as they may be of interest to different readers. Using the structure of this book, we have also designed workshops that help both students and teachers understand and apply the ideas and tools provided in the book.

We suggest all readers start with part one, Foundations. Then, if you are currently teaching a course, and would like to expand it with some fresh material, go to part two, Building Blocks, and simply dive into the building block that seems most relevant to your course or see the chapter Adapting Existing Courses in part three of the book (p. 329). If you are in a position to influence a programme as a whole, whether as a student, a programme coordinator, or in another role, take a look at the Part II: Building Blocks (p. 141), Tool 3: Curriculum Review (p. 363) and Tool 5: Example Curricula (p. 387).

We hope that the tools and materials offered in this book will be of use to the students and academics of the worldwide economics community. As Martin Wolf puts it in his foreword: “Do I agree with everything in the book? Absolutely not. That surely is the point. A good book on the teaching and studying of economics should be challenging”.

Particularly interesting is Chapter 6 (Part 1: Foundations), titled “The didactics of economics education”, in which the authors suggest a number of practical improvements in economics education both in terms of the arguments taught as well as the teaching methodologies. The most original suggestions come from the attention that Muijnck and Tieleman pay to communication, arguing that effective communication is one of the essential skills of a good and reliable economist.

Specifically, Muijnck and Tieleman argue that communication and collaboration are two essential skills which distinguish successful economists: ‘good communication and working well in teams are both vital skills for economists’ (p. 128). By reference to some recent research, they go on suggesting that the lack of communication skills among economists can be responsible for significant misunderstandings, bad decisions made by economic policy makers and, ultimately, to a general public distrust of economists. According to Muijnck and Tieleman, this means that students of economics should learn as soon as possible ‘how to communicate and collaborate, and practice whenever possible’ (p. 129).

Another desired skill discussed by Muijnck and Tieleman in their book is critical thinking. Critical thinking is viewed as being part of a process whereby knowledge is being successfully internalised. Based on that, they suggest that whenever an economic model or perspective is being taught, the content should be presented critically, meaning that instead of merely accepting the assumption of a theory, they should be adequately discussed and challenged (p. 131). Accordingly, critical thinking is very useful to students of economics, particularly those at their early career stages and those engaging in consultancy: ‘critical thinking is necessary for students to actively use their newly acquired knowledge, by applying it to the real world. To make useful recommendations to decision-makers, economists need to be able to choose between competing ways of understanding the world, know how to contextualise the output of their chosen model(s) and understand the limitations of the methods that they have used’ (p. 131).

Finally, Muijnck and Tieleman observe some of the main limits present in the didactics of economics education. They note, for instance, the fact that ‘at many universities, it is extremely rare for economics students to raise their hands in a class, where many go through an entire degree without actively participating’ (p. 133). As a potential solution to such problem, they stress the importance of stimulating students’ active participation throughout their own learning process: ‘instead of teaching economics as a set of scientific facts, teachers could aim to bring up arguments that can be debated, encouraging students to participate in their own learning. Here it is vital that teachers ask open-ended questions that can open up in the space for students to share their analytical reflections. In this way, teachers can work towards creating an open space for active discussion and joint learning’ (p. 133).