In this interview Esteban Pérez Caldentey, Miguel Torres and Romain Zivy (all at the Economic Commission for Latin America and the Caribbean, ECLAC) answer questions on a recently published book on neo-structuralism by Alicia Bárcena and Antonio Prado (eds.), Neo-structuralism and Heterodox Currents in Latin America and the Caribbean at the Beginning of the XXI Century (2015, CEPAL, in Spanish, available in pdf) 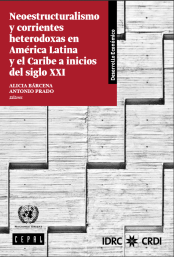 What is neo structuralism?

Neo-structuralism is a modern version of the structuralist current of thought which flourished in Latin America and the Caribbean in the 1950s and 1960s based on the thinking of a group of economists mostly based in ECLAC. Famous structuralists include Celso Furtado (1920-2004); W. Arthur Lewis (1915-1991), Raúl Prebisch (1901-1986), Juan Noyola Vázquez (1922-1962); Aníbal Pinto Santa Cruz (1919-1996); Osvaldo Sunkel (1929-) and Ignácio Rangel (1914-1994). The development of structuralism also benefited substantially from the work of economists such as Nicholas Kaldor and Michael Kalecki.

Structuralist thought emerged as a response to the development problems of Latin America and the Caribbean and dissatisfaction with orthodox responses. For structuralists underdevelopment was not due to exogenous forces or shocks or to bad policy, but it was rather an intrinsic feature of Latin America and the Caribbean ingrained in its own social and economic structure. Hence structuralism was a way to conceptualize the Latin American and Caribbean reality. Structuralism ‘became a practice, before being a policy and a policy prior to becoming a theory.’

Structuralist thinking is articulated around the following themes: power relations between center and periphery, the criticism to comparative advantage and the prominence of the external constraint, the dual character of economic development at different levels, a vision of development as structural change, the need for an adequate regional and international insertion, the necessity of a development guided by the government especially in infrastructure and productive development.

Neo-structuralism was born as a response to the adoption of the Washington Consensus in the 1990s, of its austerity and free market oriented policies as the way for countries to solve their development problems. Neo-structuralism opposes the mantra on which the Washington Consensus was based: stabilization, privatization and liberalization. Neo-structuralism developed from ECLAC’s document. Changing production patterns with social equity: the prime task of Latin American and Caribbean development in the 1990s (1990) largely inspired by Fernando Fajnzylber, continues to guide the most recent documents of ECLAC such as Structural Change for Equality (2012) and the work of economists such as Ricardo Ffrench Davis and José Antonio Ocampo.

Neo-structuralism maintains the same methodological principles and views of structuralism and constitutes an effort to confront the modern development problems faced by Latin America and the Caribbean, including how to deal with the consequences of greater liberalization in trade and finance, how to overcome productive heterogeneity, and how improve income distribution.

How does it compare to neo-liberalism?

Neo-structuralism sustains, in line with heterodox thinking, that there is no theoretical or empirical foundation to argue that markets can allocate goods and services in order to optimize economic and social welfare. Neo-structuralism argues that a strong state and government is essential to improve the capabilities and well being of a society. Developing countries need to overcome some of the major endogenous obstacles to their development including, low and volatile growth, low productivity, and unequal distribution of income, through active government efforts in education, health, redistributive policies and industrial policy among others.

In your opinion, is the perspective constructive or harmful for policy making?

Latin America and the Caribbean require a different perspective to guide their economic policy. A growth and development agenda is required and neo-liberalism does not have such an agenda. Its agenda is focused on freedom choice and of markets and on nominal stability. Latin America and the Caribbean (or at least most of the countries in the region) have achieved nominal stability but face profound development challenges that mainstream economics has proven unable to address and overcome. Poverty rates have declined at the regional level. From 1990 to 2014, the poverty rate fell from 48.4% (204 million people) to 28% (164 million people). But in spite of economic and social improvements, most Latin American and Caribbean societies still face profound levels of inequality which reflect the concentration in income and wealth and the striking production heterogeneity. On average, the region’s wealthiest 10% of the population receive 32% of total income, while the poorest 40% receives 15% of the total income. At the same time access to basic services is still limited: only 39% of the population has access to social protection mechanisms, 33% to formal financial institutions and less than 40% have access to quality education. Moreover, following a period of high growth for most economies lasting for five years (2003-2007) prior to the Global Financial Crisis and a rapid recovery from the effects of the crisis, Latin America and the Caribbean is back on its mediocre growth path. These high and persistent levels of vulnerabilities over time are a reflection of underlying structural development issues highlighted by structuralists and neo-structuralists. They have been a major stumbling block to the region’s social and economic development for decades.

The book proposes to foster a dialogue and collaboration between structuralist and heterodox economics around seven themes: (i) a methodological approach based on historical trends and measurement; (ii) the characterization of the system of economic relations around the concepts of center and periphery; (iii) the relation between income distribution, accumulation and economic growth; (iv) volatility and instability; (iv) technical progress and innovation; (vi) the relationship between the short and long-run; and (vii) the role of the State.