Economics for an Information Age 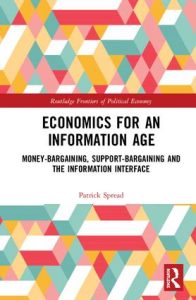 When humans are asked a question they often answer a different question which they can answer more easily. Psychologists identify this trait as ‘substitution’. Daniel Kahneman, in Thinking, Fast and Slow, devotes a whole chapter to ‘substitution’, titled ‘Answering an Easier Question’.1

Neoclassical economic theory provides a good illustration of substitution. Instead of responding to the question to which everyone wants an answer – How does economic exchange work? – neoclassical economists have chosen to answer the question: What does a system look like in which the pursuit of private interest produces public advantage, with optimal allocation of resources?

If a model is conceived in mathematical terms, then everything used in the model has to be given mathematical codification. This immediately limits the range of the model. To be given mathematical codification, phenomena have to be discrete, countable and uniform. Or at least, in a spirit of tolerance, have near enough those characteristics. Potatoes and nails may be near enough. Even cars might be regarded as near enough. Health services and financial services are more difficult to codify mathematically. The neoclassical model is conceived largely in material terms, with an implication that services are subject to much the same dynamic.

The ‘material’ understanding itself has severe limitations. Kelvin Lancaster has noted that product differentiation involves knowledge about the qualities and characteristics of things, as well as just knowledge of their existence.2 The neoclassical understanding of things only applies in so far as we are concerned with things as they are, rather than things as they answer to human interests. Product differentiation arises from the adaptation of products to human interests. Once the requirement is not just for ‘nails’, but nails of a particular size, made of a material that will not rust, and suited to use on chipboard, we are interested in information about the nails which goes beyond the mere being of ‘nails’. We buy on the basis of information about nails, according to their fit to our requirements. If further, we require that the nails are available on credit at a shop down the road at ten o’clock on a Sunday morning, then there is a lot more information on which the sale of nails will depend. Mark Casson draws attention to the limitations of the material understanding of the neoclassical model with specific reference to the requirement for information: ‘The conventional view of the real economy is highly materialistic, and the legacy of this view is still reflected in the theory of the firm. It emphasises the flow of tangible resources such as physical products, rather than intangible resources such as information’.3

In Phishing for Phools George Akerlof and Robert Shiller, and their researchers, describe the many ways in which information is presented to attract buyers. Much of it is presented in highly deceptive form. Companies distort and manipulate information in order to convince buyers that what the company is offering is just what the buyer wants, and better than any other company can offer. Companies are ‘phishing’ for ‘phools’ who will buy their products. Akerlof and Shiller do not see this as incompatible with the neoclassical model to any significant extent. They argue simply that the ‘optimal allocation of resources’ arising from the model has to be understood as an optimal allocation based on the assessments made by buyers in receipt of the manipulated information. That it is an optimal allocation of fools is of no account.

Akerlof and Shiller affirm their commitment to neoclassical ‘markets’ as the dependable benefactors of societies by commandeering Adam Smith’s idea of an ‘invisible hand’. They remark: ‘Adam Smith wrote that, with free markets, as if “by an invisible hand…[each person] pursuing his own interest” also promotes the general good’.4 But readers of the WEA Commentary No. 7.6 (p. 9) will know that Smith’s reference to the ‘invisible hand’ in The Wealth of Nations refers to the hand that prefers ‘the support of domestic to that of foreign industry’.5 Elsewhere Smith makes very plain that he sees the ‘merchants and master manufacturers’ as a third order of those engaged in economic activity which is not concerned with the interests of society as a whole:

To widen the market, and to narrow the competition, is always the interest of the dealers. To widen the market may frequently be agreeable enough to the interest of the public; but to narrow the competition must always be against it, and can only serve to enable the dealers, by raising their profits above what they naturally would be, to levy, for their own benefit, an absurd tax upon the rest of their fellow-citizens.6

Smith the moral philosopher was attracted to the idea that the pursuit of private interest could result in public advantage, but Smith the economist saw plainly that he could not sustain the case. It was only resurrected through manipulative selection from Smith’s work by the economists who formulated the neoclassical mathematical model in the late nineteenth century. The model is a mathematical illustration of a conjecture of moral philosophy rather than an explanation of how economic exchange works. It uses mathematical codification, with necessary assumptions, to substantiate a conception of how private interest might advance public interest. The exercise would have been of little interest were it not for its ideological implications. It appeared to affirm the desirability of pursuit of private interest at a time of surging communal interest, and against a common social sentiment that condemned ‘selfishness’. Some saw it would be advantageous if the exercise were actually taken as an explanation of the workings of economic exchange. This group assembled such support in academia that the exercise became institutionalised as ‘mainstream economic theory’. The theory group enlisted the ‘Great Man’ as a supporter, though he clearly was not. The ‘invisible hand’ is bait for fools.

The approach of Akerlof and Shiller is consistent with the general approach of economists to issues of information. They treat problems of information as an overlay to the neoclassical model of exchange, rather than incompatible with it. The model remains ‘near enough to be useful’. Problems of ‘bounded rationality’ arising from information overload and ‘asymmetries’ of information that can impede exchange are awkward but within the neoclassical tolerance. An exception is Louis Phlips, who concludes: ‘Rather than trying to save the concept of a perfectly competitive market and the ‘law of supply and demand’ which is supposed to clear this market, a lot of energy is saved if one simply admits that this law is inadequate’.7 Joseph Stiglitz acknowledges that ‘asymmetric information’ is incompatible with the neoclassical model, but opts to stick with it simply because it is not worth the effort involved to pursue paradigm change.8 He has so little faith in the capacity of his colleagues to adopt better theory that he prefers to tolerate false theory and enjoy the advantages of being part of a mainstream theory group. All group members probably make a similar calculation, since it is plain that the paradigm is false, even as ‘near enough’. After all, it was not formulated to explain how economic exchange functions, but to demonstrate mathematically how private interest accords with public interest. Mathematical codification is so limiting that the model inevitably lacks empirical consistency. Societies all suffer the consequences. Our psychology has evolved to protect our interests, rather than for the pursuit of truth.

The information issues identified by Akerlof and Shiller confirm the dysfunction of the neoclassical model. The fools who are buying on the basis of information manipulated to attract their interest are all buying different ‘products’. They are buying different bundles of information. There is no uniformity in what they buy. Rational behaviour provides a degree of uniformity and predictability in human choice. But fools all make different choices. It is no longer possible to conceive of or draw the supply and demand curves that are so fundamental to the neoclassical model. There is no longer a ‘market price’. The ‘products’ lack the characteristics required for mathematical codification.

The introduction of the idea of support-bargaining and money-bargaining makes possible a new approach to these questions of information. Support-bargaining conceives politics, and social intercourse in general, as a transactional process. People act and communicate in such a way as to gain the group support that is essential to their psychological well-being. In politics political parties disseminate information that is likely to assemble support. Such support, expressed through formal support-bargaining structures, will potentially give them ‘power’, or place them in positions of ‘government’. In politics the bargaining is very largely over abstract policies and programmes. These are codified linguistically and transmitted in the form of information. That they are composed of information means they offer even greater scope for manipulation than is experienced by Akerlof and Shiller’s ‘phools’ in money-bargaining.

The issues surrounding the use and manipulation of information are perhaps more pressing than ever before, because we live, by common consent, in an information age. Many transactions are now concluded on the basis of information received electronically. Giant companies assemble data about individuals and sell it to other companies, who use the data to disseminate information manipulated to make it relevant to the precise circumstances of the people they are contacting. There is immensely expanded scope for fooling. An information age needs for its protection a theory that explains the function of information in human societies.

These and other issues are the subject of Economics for an Information Age.9 The discussion is mainly concerned with economic issues – that is, with money-bargaining. But money and money-bargaining are outcomes of support-bargaining. Social theories are outcomes of intellectual support-bargaining. Consequently the problems encountered with information in money-bargaining cannot be entirely understood within the normal confines of that field. The analysis extends into behavioural theory, sociology and philosophical approaches to information. It even extends to cartography. While linguistic codification is overwhelmingly the main form in which information is transmitted, and neoclassical economists use mathematical codification, it is instructive to identify the distortions that arise when information is codified in the form of maps. It helps to answer that question to which everyone wants an answer: How does economic exchange work? It helps also to answer the question that is both more specific and more general: What is the function of information in human societies?