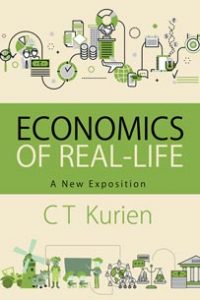 CT Kurian is still active, despite his advanced years and failing eyesight. His latest book is Economics of Real-Life: An Exposition*. It is deceptively simple in exposition, given that it is based on a depth of knowledge. Step by step, the reader is led through an alternative way of looking at an economy, building from the simplest of communities to, by the end of the book, a global economy. In doing so, he deviates from the mainstream division of the economy into households and firms, identifying instead nine different units and the links between them.

As with his earlier Wealth and Illfare, Kurian uses thought experiments to build an understanding of the evolution of economic relationships. In this book, the structure is more developed, with a more nuanced structure than the mainstream distinction of households and firms. Households can be involved in production as well as consumption, and they are not homogeneous. For example, households can be labour poor, subject to a labour constraint (e.g. landowners), or capital poor, subject to a resource constraint (e.g. landless labourers). Consequently specialisation of roles and imbalances of negotiating power can be considered.

Kurian notes that economic relationships tend to get ‘institutionalised’, thereby providing a sense of stability. Study of such institutions, therefore, forms an important part of economics. Ownership is a matter of social relationships. Traders are seen as an important determinant of the structure and evolution of an economy, and with their arrival “production increasingly becomes a specialised activity and the space between the producer and the consumer widens” (p.116). Even in production, there are intermediate goods, many of which are allocated through markets. Wherever there are markets, there are merchants, so the producer-consumer link is generally by no means direct. A nuanced view of society and its economic dimension can be developed through a focus on ownership, authority, intermediation and asymmetry of information. As intermediaries and knowledge asymmetries are important, social structures evolve, resulting from and enhancing differences. In addition, the importance of authority in decision making indicates that economics and politics are interrelated.

Kurian identifies the cherry picking of Adam Smith that can be found in modern mainstream texts. While self-interest may be a motivator, Smith also recognises (at the same point in his Wealth of Nations) the need for co-operation, saying of man, “In civilised society he stands at all times in need of the co-operation and assistance of great multitudes”. Kurian also notes the misrepresentation of Smith’s reference to the “invisible hand”.

Rather than consumer sovereignty, Kurien notes the importance of consumer manipulation (through advertising, etc.). Similarly shareholding results in capitalist ownership being a form of “fleeting ownership”. Finance also sees the growth of “proxy wealth”, “a claim on physical wealth that can easily be transacted, unlike physical forms of wealth” (p.98). This can cause problems, “creation and possession of proxy wealth can easily become substitutes for increasing real wealth. Finance then becomes the agency for this aberration.” There can be extreme economic and social consequences of this development. Kurian’s discussion of the government’s supervisory powers encapsulates some strong arguments as to why we should not really think of the being a “market economy” independent of government.

Kurian sees his Chapter 9 as key to the book. Tt presents a clear description of his analytical structure. The economy can be seen as a network of participants and activities, units and links. These result in nine different types in his table on p.117. There are not only various types of households and economic units such as firms and banks, but also traders are separately identified. “If multilateral exchange is one of the main links in a modern economy drawing in practically all its different units into interaction, the role of the trader cannot be minimised” (p.121). In addition, he expressly states that the economy is “always in a state of flux”, challenging the perspectives that focus on equilibrium.

As a further step away from economics based on perfect competition and closer to reality, “most markets are controlled by a few producer-trader combines that can easily fix prices” (p.134). How suited is mainstream economics for guiding policy in such situations?

Chapter 12 covers the emergence of MNCs. It presents a broad sweep of global world economic events since WWII.

Later chapters contain an interesting brief description of events in the Indian economy, especially since independence, plus some further speculation on policy issues and possible future development paths.

While aimed primarily at an Indian audience, you should not be put off by that. It is a worthwhile read for those with an interest in economics more generally. Central to the book is the view that economies are always changing, and so economics must adapt also to be relevant to the country and time under consideration. Consequently there is a need for ‘substantive logic’ based on the nature of the problem under consideration, rather than internally logically consistent axiomatic approaches.

The framework is one that allows for multidisciplinary analysis and highlights the limitations of a mainstream economics perspective. These are, in particular, the mainstream emphasis on equilibrium, its reliance on its own concept of a utopian economy, the artificial distinction between a market economy and the political system and public sector.

“President Sarkozy expressed concern that while GDP indicated steady increase and progress the perception of most citizens was that life was becoming more and more difficult, and pointed out that ’we have built a cult of data, and we are now enclosed within it’ and that reality appeared to be ’completely out of synch with the story told by the data’.” (p.150)
“By 1990, the largest 100 MNCs (excluding those in banking and finance) accounted for 16 per cent of the world’s productive assets, one third of it outside their respective home countries…At the end of the 20th century, 80 per cent of MNC employees were in developing countries…The MNCs have become champions of outsourcing…such arrangements usually involve specification of design, supply of raw materials and credit and the purchase of the entire output…bringing material into the country and taking goods outside the country are essentially ‘inter-departmental’ transfers not subject to duties of the state. It also provides the corporation a great deal of freedom in pricing. Many goods that enter global trade, therefore, get priced through this internal ‘transfer pricing’ while the MNCs claim to be champions of prices being determined by the market…The internet revolution…became the big facilitator of the MNCs in their global activities.” (pp.155-156)
“For division of labour to become effective, it has to be accompanied by acceptable arrangements for exchange. The social organisation of market is acceptable, but there must be arrangements to ensure that intermediaries do not capture the market…Capitalist markets do not satisfy this criterion.” (p.233)