On Diane Coyle’s Cogs and Monsters 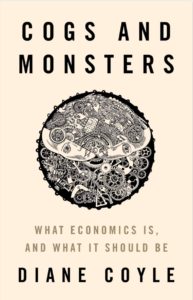 Macroeconomists seem to me the biggest offenders n not taking such empirical issues (of practical data handling) seriously enough. This might sound like sheer contrarianism given that macroeconomists are constantly wielding data; after all, their business is analysing the behaviour of the whole economy and forecasting its future path. My concerns are, first, that too few think about the vast uncertainty associated with the statistics they download and use; and secondly, how difficult it is to draw definitive conclusions about economy-wide phenomena, the aggregated outcomes of choice made by millions of businesses and consumers interacting in specific historical and geographic contexts, and social and political relations.

There’s a lot in this new book by Diane Coyle that I like, and I highly recommend reading it.

Unfortunately, there are also some things in it I find very hard to swallow.

A recurrent theme in the book — as in her earlier The Soulful Science (2010) — is Coyle’s view that much of the critique waged against mainstream economics from heterodox economists like yours truly and others are more or less of a straw-man kind and that we haven’t really understood the fact that economics “has changed a lot in two decades.”

One example she refers to — to underpin her view — is the development of the ‘new’ behavioural, ‘experimental,’ and ’empirical turn’ in economics.

So let’s take a look at that and what some of us ‘heterodox’ economists really have had to say about it.

Coyle — as many other more or less mainstream economists nowadays — seems to maintain that the empirical methods developed within economics — natural experiments, field experiments, RCTs — help us to answer important economic questions. I beg to differ. When looked at carefully, there are in fact few real reasons to share the optimism on this ’empirical turn’ in economics.

Field studies and experiments face the same basic problem as theoretical models — they are built on rather artificial conditions and have difficulties with the ‘trade-off’ between internal and external validity. The more artificial conditions, the more internal validity, but also less external validity. The more we rig experiments/field studies/models to avoid the ‘confounding factors’, the less the conditions are reminiscent of the real ‘target system.’ You could of course discuss the field vs. experiments vs. theoretical models in terms of realism — but the nodal issue is not about that, but basically about how economists using different isolation strategies in different ‘nomological machines’ attempt to learn about causal relationships. I have strong doubts about the generalizabiy of all three research strategies because the probability is high that causal mechanisms are different in different contexts and that lack of homogeneity/stability/invariance doesn’t give us warranted export licenses to the ‘real’ societies or economies.

By this, I do not mean to say that empirical methods per se are so problematic that they can never be used. On the contrary, I am basically — though not without reservations — in favor of the increased use of experiments and field studies within economics. Not least as an alternative to completely barren ‘bridgeless axiomatic-deductive theory models. My criticism is more about aspiration levels and what we believe that we can achieve with our mediational epistemological tools and methods in the social sciences.

Real-world social systems are not governed by stable causal mechanisms or capacities. The kinds of ‘laws’ and relations that econometrics has established, are laws and relations about entities in models that presuppose causal mechanisms being atomistic and additive. When causal mechanisms operate in real-world social target systems they only do it in ever-changing and unstable combinations where the whole is more than a mechanical sum of parts. If economic regularities obtain they do it (as a rule) only because we engineered them for that purpose. Outside man-made ‘nomological machines’ they are rare, or even non-existent.

Taking assumptions like utility maximization or market equilibrium as a matter of course leads to the ‘standing presumption in economics that, if an empirical statement is deduced from standard assumptions then that statement is reliable’ …

The ongoing importance of these assumptions is especially evident in those areas of economic research, where empirical results are challenging standard views on economic behaviour like experimental economics or behavioural finance … From the perspective of Model-Platonism, these research-areas are still framed by the ‘superior insights’ associated with early 20th century concepts, essentially because almost all of their results are framed in terms of rational individuals, who engage in optimizing behaviour and, thereby, attain equilibrium. For instance, the attitude to explain cooperation or fair behaviour in experiments by assuming an ‘inequality aversion’ integrated in (a fraction of) the subjects’ preferences is strictly in accordance with the assumption of rational individuals, a feature which the authors are keen to report …

So, while the mere emergence of research areas like experimental economics is sometimes deemed a clear sign for the advent of a new era … a closer look at these fields allows us to illustrate the enduring relevance of the Model-Platonism-topos and, thereby, shows the pervasion of these fields with a traditional neoclassical style of thought.

Contrary to Coyle’s optimism, I would argue that although different ’empirical’ approaches have been — more or less — integrated into mainstream economics, there is still a long way to go before economics has become a truly empirical science.

Almost all the change and diversity that takes place in mainstream economics today only takes place within the analytic-formalistic modeling strategy that makes up the core of mainstream economics. All the flowers that do not live up to the precepts of the mainstream methodological canon are pruned. You’re free to take your analytical formalist models and apply them to whatever you want – as long as you do it using a modeling methodology acceptable to the mainstream. If you do not follow this particular mathematical-deductive analytical formalism you’re not even considered doing economics. “If it isn’t modelled, it isn’t economics.” This isn’t pluralism. It’s a methodological reductionist straightjacket.

No matter how many thousands of models mainstream economists come up with, as long as they are just axiomatic variations of the same old mathematical-deductive ilk, they will not take us one single inch closer to giving us relevant and usable means to further our understanding and explanation of real economies.

So — in conclusion — it is not that heterodox critics haven’t noticed the development in mainstream economics that has taken place during the past 20-30 years. We have noticed — and understood that it still far too much builds on the same old neoclassical straight-jacket methodology.