Discussing Can we avoid another financial crisis?

My first book since Debunking Economics has just been released in the UK, and will come out in May in the USA. Can we avoid another financial crisis? is a brief (140 page, 25,000 word) explanation for the lay reader of how the 2008 crisis was caused by factors that mainstream economics ignores—fundamentally, the levels of private debt and credit-based demand—and why other countries that avoided a crisis in 2008 are likely to suffer a similar crisis in the near future.

My argument is based in equal measure on my interpretation and model of Hyman Minsky’s Financial Instability Hypothesis (though my book is equation-free), and my analysis of the role of endogenous money—which I now prefer to call “Bank Originated Money and Debt” or BOMD—in causing both economic booms and slumps. The book relies upon the statistical work of the BIS, which since 2014 has started publishing detailed databases on private debt, government debt, house prices, and recently consumer prices. This has made it possible for me to analyse the debt and credit dynamics of 43 countries to identify which have had a crisis, and which are likely to have one in the future.

There are two new insights developed in the book that are new for people who are otherwise familiar with my analysis: that a realistic macroeconomics can be derived directly from macroeconomics itself; and that a rough guide to whether a country is likely to experience a financial crisis can be derived from the BIS data.

The mainstream is currently undergoing some soul searching about how their models failed both in the crisis and its aftermath, but as usual is convinced that macro should be derived from micro (Blanchard 2016, p. 3). After outlining the complex systems (Anderson 1972) and Neoclassical own-goal critique of this extrapolation fallacy (Sonnenschein 1973, Mantel 1975, Shafer and Sonnenschein 1993), I show that Minsky’s basic insights can be derived directly from basic macroeconomic identities (the employment rate, the wages share of GDP and the private debt to GDP ratio). I don’t show the math in the book, given that this is a book intended to be read by a lay audience, but it’s available on my new website at http://www.profstevekeen.com/crisis/models/.

The Smoking Gun of Credit

My analysis of the role of credit in aggregate demand and income leads to the proposition that aggregate demand (spent on both goods and assets) is equal to the turnover of existing money plus credit, which is equivalent to the change in private debt (Keen 2015)—see also http://www.profstevekeen.com/crisis/demand/. Since most credit today is used to buy assets rather than goods and services, a rough guide to total monetary demand is given by the sum of GDP plus the annual change in debt (there is double counting of the order of 15% of GDP, but it is still a good guide).

This leads to a chart I describes as “the Smoking Gun of Credit”, which shows how a sharp decline in the rate of growth of private debt when a country’s private debt to GDP ratio is around 150% of GDP is sufficient to cause a serious decline in aggregate demand, income and capital gains. 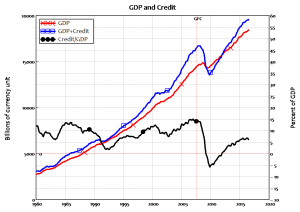 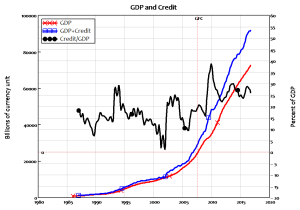 The chart explains why the USA had a crisis in 2008 (Figure 1), but countries like China did not (Figure 2): the former suffered a substantial fall in credit-based demand with that demand turning negative for the first time since the Great Depression. China—and several other countries that apparently evaded the worst of the crisis in 2008—managed to stop credit demand from plunging. 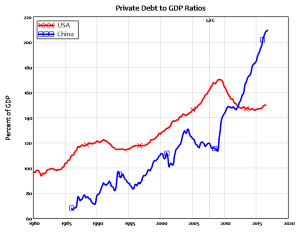 The USA had a crisis in 2008 and is now suffering from “Credit Stagnation” (not “Secular Stagnation”), because with private debt once again exceeding 150% of GDP, it is already in the range where a slowdown in debt growth can cause a recession (see pages 81-83 of the book), and only fractionally below its peak level of private debt).

On the other hand, China’s evasion of the crisis has given it a staggeringly higher debt level, and a dependence on continued demand from credit (the annual change in debt) which is now running at over 25% of GDP. This can’t be sustained (though China can do more than most to switch from credit to government based demand), and China, though by far the largest, is only one of 9-16 countries which evaded the crisis by increased private debt, and now have the pre-requisites for a future crisis of excessive private debt (greater than 150% of GDP) and dependence on unsustainable credit-based demand (exceeding 10% of GDP).

This leads to a natural classification of countries into either the “Walking Dead of Debt” (USA, Europe, UK) or “Zombies to be” (China, Canada, Australia, Korea, Belgium and several others; there are very few that aren’t in one camp or the other—Germany being the notable exception). When these countries’ credit bubbles burst, the global economy will be trapped in not Secular but “Credit Stagnation”.

Finally, I argue for a “Modern Debt Jubilee” as an effective policy to end the crisis, if matched by necessary reforms of bank lending to prevent a future recurrence. Since I believe these policies have a snowflake’s chance in hell of being implemented, my conclusion about the economic future for the planet is rather cynical.

In other news, I have just launched a crowdfunding campaign on Patreon (see https://www.patreon.com/ProfSteveKeen) to enable me to continue my work as a public intellectual.

I see myself as the canary in the coal mine here. Just as non-mainstream, and in particular Post Keynesian economics, is being institutionally recognised (McLeay, Radia et al. 2014) and Neoclassicals are admitting flaws in their paradigm (Blanchard 2016, Kocherlakota 2016, Romer 2016), Neoliberal economic policies applied to Universities in the UK are unwittingly destroying the one toehold that we have in academia—low ranked universities—in a three pronged pincer movement.

The first stage was the introduction of the “Research Excellence Framework” (REF), which focused applications for economics research classification only at the top status universities, where heterodox economics is shunned.

The second was undermining the viability of low status universities via the removal of caps on first year student intakes. High status universities have simply offered more cheap-to-teach humanities vacancies, and high school students, who are utterly uninformed “consumers” of the product called “university”, have taken up these positions.

The third, which may commence next year, is the ranking entire universities as “Gold, Silver or Bronze” teaching institutions in what is known as the “Teaching Excellence Framework” or TEF (the UK seems obsessed with TLAs: “Three Letter Acronyms”). This will surely mean that universities where pluralism is practiced in their economics departments will be ranked as “Bronze” teaching institutions, while high status institutions where the orthodoxy dominates economics tuition will be ranked Silver or Gold.

All these challenges to the viability of low status UK universities has meant that it’s no longer possible for Kingston University to support me in my public role. It’s either take on a full teaching load at Kingston—roughly four times what I’m doing right now—or fund three quarters of my salary. I’ve taken the latter option, and am currently up to US$2800 a month.

Please spread the word about my Patreon campaign. What I’m doing is not a viable option for all heterodox economists of course, but it will give me a public and political platform to challenge both mainstream economics and the deluded Neoliberal approach to university education and research funding.