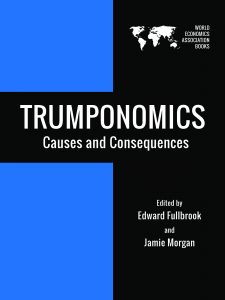 Two things seem generally agreed about Donald Trump’s election as President of the United States: it is, for good or for bad, potentially a major historical turning point and its most important determinant was the economic reality experienced today by the majority of Americans. Given that over recent decades that reality came into being through economic polices largely designed by the economics profession, it seemed to us imperative that economists come together in an open forum – one not dominated by a particular school or ideology – to share their insights not only with other economists but also with a wider intellectual audience.

The essays collected here provide important insights and analysis from some of the most respected names in their fields. The title of this collection is Trumponomics: Causes and Consequences, but the essays range further than this might imply. The contributors have a great deal to say about economy, but are not hidebound by the narrow strictures of much of contemporary economics. This is not a set of essays confirming the obvious through abstruse mathematics. Instead, the essays set out the many socio- economic factors that help to account for the appeal of Trump, the limits and tensions of the policy tendencies articulated by Trump, and the general context of failure of economics as theory and practice that neither prevented the socio-economic factors nor lead to reasonable alternatives now.

This book is downloadable here as a PDF.

“Donald Trump’s capture of the US presidency has shocked the political establishment. This book is a collection of excellent essays by leading center-left and left economists. It provides a comprehensive initial assessment of the sources of Trump’s success and the likely outcomes of his policies. It is essential current reading and, in time, it will become a historical record of what the center-left and left was thinking at this juncture in history.”

“A comprehensive and wide-ranging collection of analyses of Trumponomics. Very much recommended as going well beyond the traditional media.”

"If you want to learn how to Trump Trumponomics – this is the essential field guide to understanding and challenging the misguided economics driving US policy."

"This rich – but not avaricious or over-priced – volume offers wide-ranging analyses and critiques of the economic and political background to Donald Trump’s electoral success, the fallacies and failings of economic theory, business strategies and government policies that facilitated his populist appeal. The contributors demonstrate the explanatory power of a pluralistic heterodox political economy and its contribution to the critique of power and domination in an increasingly authoritarian and financialized age."