The Economy of the Hamster 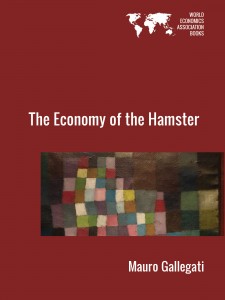 This book imagines an economy that could be possible if we managed to emancipate ourselves from the hegemony of living to consume – and thus working to consume – instead of living well. It imagines a change of paradigm, which would result from us understanding that we are in a finite world, in a Malthusian environment mitigated by process innovations, where humanity interacts with the environment. Only by imagining that human needs are infinite, and non-renewable resources are also unlimited, can we conceive the possibility of endless growth of production. In a finite world like ours, the second law of thermodynamics still stands and, therefore, even if technology could develop indefinitely, sooner or later it would clash with the limits of non-reproducible resources. What this book tries to outline is that, even though there is no upper limit, or number of product units, or GDP, to enforce the sustainability of growth, we take possession of the future which, as a generation, is not ours. But there’s more. While acknowledging that energy and resource-saving technological progress is able to shift the possible GDP (defined as that level of product which does not compromise reproducibility), we must question ourselves on the role of economy as being functional to man and not vice versa, where we work to live (well) and not vice versa.

Mauro Gallegati is a Professor of Economics at the Polytechnical University of Marche, Ancona. He was a pupil of Giorgio Fuà and Hyman Minsky. He was a visiting professor at several universities, including Stanford, MIT and Columbia. On the editorial board of numerous scientific journals, coordinator of several European research projects, he is now responsible for a task force of INET on the Great Recession. His research includes analysis of the economy as a complex system, economic fluctuations, nonlinear dynamics, models of financial fragility and interacting heterogeneous agents. He is considered one of the pioneers of economic modeling based on agents (Agent Based Models). Gallegati is well known for his widely cited work with Joseph E. Stiglitz and Bruce Greenwald on information asymmetries, financial crises and the ABM. On the scientific committee of BES (Equitable and sustainable well-being), he addresses the issue of sustainability. He is the author of several monographs and his articles have been published in international journals on economics, econometrics, economic history, history of economic thought, mathematics, complexity and econophysics.