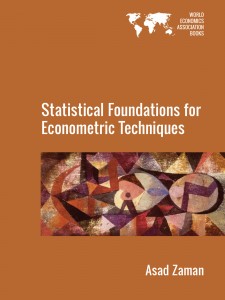 “Statistical Foundations for Econometric Techniques” features previously unavailable material in a textbook format for econometrics students, researchers and practitioners. Taking strong positions for and against standard econometric techniques, the book endorses a single best technique whenever possible. In many cases, the recommended optimal technique differs substantially from current practice. Detailed discussions present many new estimation strategies superior to conventional OLS, and ways to use them. It evaluates econometric techniques and the procedures commonly used to analyse those techniques. It challenges established concepts and introduces many techniques that are not available in other texts. It recommends against using the Durbin-Watson and Lagrange Multiplier tests in favour of tests with superior power. This title forms a judicious mixture of various methodological approaches, and it illustrates Empirical Bayes estimators and robust regression techniques possessing a 50 per cent breakdown value.

This book is currently available in PDF.

Zaman... succeeds in asserting the link between classical statistics and econometrics... [. H]is book should be of great interest to both teachers of core econometrics graduate courses as well as to practitioners of the art of econometrics... One of the most useful features of the book is that all of the techniques discussed are critiqued very carefully, with great emphasis on historical development, ease of implementation in practice, and realism of assumptions. The book also addresses with great insight the tensions between Bayesian and classical econometrics... Overall, the book is unique in two ways. First, there is emphasis not only on theoretical detail, but also on intuitive appeal. Second, the book brings together a very wide variety of different techniques and statistical approaches to econometrics, and does so in a rather unifying fashion... [I]t is a must for the bookshelf of the practicing econometrics, as important areas such as the bootstrap, higher order asymptotics, Edgeworth expansions, empirical Bayes, and the Gibbs sampler are elucidated very clearly.

Asad Zaman’s treatment of theoretical econometrics from the viewpoint of mathematical statistics provides a highly informative insight for economists who want to develop the subject in a way that builds on their own economic analyses. In this way, he has taken econometrics back to its most fruitful origins, where measurement was guided by economic theory rather than open empiricism. He combines the probability structure on which statistical inference is based with the formal theory of economics in order to draw conclusions from observed data.

Zaman beautifully unifies a wide assortment of topics in cutting-edge statistics and econometrics, ranging from advanced testing and estimation theory (including bootstrap) to empirical Bayes, minimax, and robust procedures. Zaman’s is unique among books at this level in its insightful coverage of topics non-standard among econometricians, its quick-paced readability, and its simultaneous concern with both foundational and practical issues in the advancement of knowledge.

This unique text... is statistically well-informed and in tune with the needs of modern econometrics. The discussion on texts and optimal inference is superb. The Bayesian and Frequentist viewpoints are seamlessly integrated. A must read for graduates and professionals alike.