Green Capitalism: The God that Failed 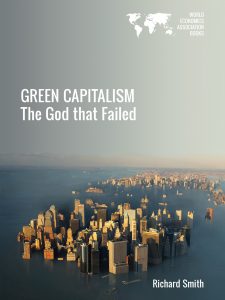 Green Capitalism: The God that Failed is essential reading for anyone opposed to planetary suicide. Capitalism is waging a war against nature. And until this becomes obvious to masses of people, we will be limited to reformist projects that can only slow the drive to oblivion, but not stop it. As Smith reminds us, "It is no exaggeration to say that this is the most critical moment in human history.

Richard Smith reveals that the emperor has no clothes. Capitalism promotes an illusion of progress based on the absurd belief that endless growth in a finite world is possible and that the biosphere that enables all life to exist and flourish is a mere adjunct to the economy. For too long, we have ignored the reality that the economic system itself is built on such untenable assumptions that it is inevitably destructive. Everyone who cares about the future of our children and grandchildren must read Smith's book so we can begin the urgent challenge of moving to a different path.

This book deals with the prime threat to human life on earth: the tendency of global capitalist economic development to develop us to death, to drive us off the cliff to ecological collapse. It begins with a review of the origins of this economic dynamic in the transition to capitalism in England and Europe and with an analysis of the ecological implications of capitalist economics as revealed in the work of its founding theorist Adam Smith. I argue that, once installed, the requirements of reproduction under capitalism – the pressure of competition, the imperative need to innovate and develop the forces of production to beat the competition, the need to constantly grow production and expand the market and so on, induced an expansive logic that has driven economic development, and now overdevelopment, down to our day.

In successive chapters I explicate and criticize the two leading mainstream approaches to dealing with the ecological consequences of this overdevelopmental dynamic – décroisance or “degrowth,” and “green capitalism”. I show that the theorists and proponents of no-growth or de-growth like Herman Daly or Tim Jackson are correct in arguing that infinite economic growth is not possible on a finite planet but that they’re wrong to imagine that capitalism can be refashioned as a kind of “steady state” economy, let alone actually “degrow” without provoking economic collapse. There are further problems with this model, which I also investigate. I show that the theorists and proponents of “green capitalism” such as Paul Hawkin, Lester Brown and Frances Cairncross are wrong to think that tech miracles, “dematerialization,” new efficiencies, recycling and the like will permit us to growth the global economy more or less forever without consuming and polluting ourselves to death. I show that while we’re all better off with organic groceries, energy-efficient lightbulbs and appliances, recycling and the like, such developments do not fundamentally alter the eco-suicidal tendencies of capitalist development because infinite growth, even green growth, is just not possible on a finite planet.

In the final chapters I argue that since capitalism can only drive us to ecological collapse, we have no choice but to try to cashier this system and replace it with an entirely different economy and mode of life based on minimizing not maximizing resource consumption, based on public ownership of most, though not all of the economy, on large-scale economic planning and international coordination, and on a global “contraction and convergence” between the North and the South around a lower but hopefully satisfactory level of material consumption for all the world’s peoples. Whether we can pull off such a transition is another question. We may very well fail to overthrow capitalism and replace it with a viable alternative. That may be our fate. But around the world, in thousands of locations, people are organizing and fighting against corporate power, against land grabs, against extreme extraction, against the incessant commodification of our lives. Here and there, as in Greece and China, ruling classes are on the defensive. All these fights have a common demand: bottom-up democracy, popular power. In this lies our best hope. This little book is intended as more ammunition for that fight.

Richard Smith has worked as a sailboat rigger, African expedition leader, carpenter-builder and briefly as a lecturer in history. He wrote his UCLA History Ph.D. thesis on the contradictions of market reform in China’s transition to capitalism (1989). He held postdoctoral appointments at the East-West Center in Honolulu and at Rutgers University New Brunswick and has published articles on the Chinese revolution, China’s road to capitalism, and capitalist development and China’s environment for Against the Current, New Left Review, the Ecologist, and Monthly Review and other journals. He has published articles on capitalism and the global ecological crisis in the Journal of Ecological Economics, Capitalism Nature Socialism, Real-World Economics Review, Truthout.org, Adbusters, and other media. He is presently completing a book on China’s communist-capitalism and ecological collapse.

Chapter 1: How Did the Common Good Become a Bad Idea? The Eco-suicidal Economics of Adam Smith

Chapter 2: Beyond Growth or Beyond Capitalism?

Chapter 4: Climate Crisis, the Deindustrialization Imperative, and the Jobs vs. Environment Dilemma

Chapter 5: Capitalism and the Destruction of Life on Earth: Six Theses on Saving the Humans