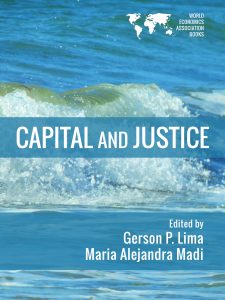 The book Capital and Justice calls for a deep examination of current power, politics and economics in a social context where democratic institutions are being threatened. The contributions discuss the various aspects of global accumulation, production and employment from a broader perspective in order to examine their interlinkages with other economic, social, and political processes. Indeed, concerns with social inclusion extend well beyond the purely economic account of justice and fairness, since the degree of economic inequality also affects social cohesion and political stability, and can also have negative implications for economic growth and democratic institutions.
The book focuses on the theoretical analysis and empirical discussions about the contemporary relations among the inflated financial markets, the low investment trends and the changes in the patterns of production and employment. In this respect, there were three groups of contributions that aim to think and build a just economy. The first group (Koo; Hermann; Madi) presents the main features of global economic dynamics. The second (Yadu and Satheesha; Eynon) analyses the urgent social challenges and the trends in political strategies. Finally, the third group (Komlos; Lima; Morgan-Milá) challenges conventional mainstream viewpoints and highlight the foundations of an alternative political economy paradigm.

The editors, Gerson P. Lima and Maria Alejandra Madi, hope the book will stimulate further debate among students, professional economists and social scientists – whether academics or not – on how to progress towards rethinking the relations between economics, justice and democracy, that is, between economics and politics.

“This is a timely book of extraordinary importance for both academic and non-academic audiences. Written by progressive economists, the book is not only insightful and disturbing, but also convincing and inspiring. The book examines the convoluted journey of economic globalization that has fundamentally reshaped capital and labour around the world since late 1980s. It demonstrates that economic globalization has subjugated politics to economics, and in the process, empowered the rich and disempowered the poor. As such, the authors advocate for new ways of promoting policy initiatives that are more socially inclusive and economically just. Obviously, this requires re-gaining the primacy of politics over economics and reorienting the economic matrix of market economics in both theory and practice.”

“The is the best book by economists I’ve read on economics and justice.  Almost makes it possible to see that justice and economics are not natural enemies.  Keep probing.”

“This new World Economics Association book, edited by Gerson P.  Lima and Maria Alejandra Madi, addresses some of the current hottest issues after the 2008 financial meltdown,  trying to build a bridge between politics and economics. The traditional approach has been to respect a division of labor within the social sciences where economic and political science studies were supposed to belong to different worlds. The result has been to extract the essentials from most of the crucial issues of the economic and political reality.”

“This collection presents a stimulating mix of alternative perspectives, critiques and options in comparison to a narrowly mainstream economics approach. Written in accessible language, it highlights many unstated constraints implicit in conventional textbook approaches.”