Human rights and the economy are intrinsically linked issues. There is an important economic dimension to human rights in terms of the resources needed to guarantee rights and how they can be socially allocated for this purpose. On the other hand, human rights are, or should be, an important normative parameter for the organization of activities and the economic system itself. However, the fiscal implications of human rights obligations are not fully systematized and are not regularly considered. This “disconnection” has many negative consequences, which are aggravated in contexts of instability or economic crisis and in the face of fiscal austerity measures.

The evident analytical, academic and political detachment of the two fields may explain the incomprehension and indifference of many professionals in both areas and also in a scarce bibliography that articulates these themes. Neoclassical economics2 uses a positive approach to seek efficiency in allocating resources regardless of whether they are unequally distributed, whereas human rights follow normative standards that seek universal rights which demand equity in access. Although neoclassical economics admits that, once efficiency is achieved, equity considerations on the allocation of resources are important, they are deemed as a secondary criterion involving value judgements, and sometimes at odds with efficiency. Economics’ positive approach is not supposed to involve value judgments, unlike the normative approach that stipulates a priori that a part of the economy must be organized in order to allocate resources to guarantee human rights (Branco, 2009).

However, looking at fiscal policy objectives of promoting macroeconomic stabilization, improving resource allocation and addressing distributional differences (Musgrave and Musgrave, 1980), we identify that the relationship between fiscal policy and human rights is not only viable, but essential. Neoclassical commitment to utilitarian welfarism excludes the possibility of incorporating rights as intrinsic values in its approach to fiscal policy, to the extent that the judgment of the relative goodness of alternative states of affairs must be based exclusively on aggregate individual utilities (Sen, 1979). It is true, that neoclassical economists might, in some cases, favor rights aligned fiscal policies, as with provision of education to those who could not afford it resulting in a more productive workforce. However, in those cases investment in rights are justified for efficiency reasons but not for a recognition of rights as intrinsic values. 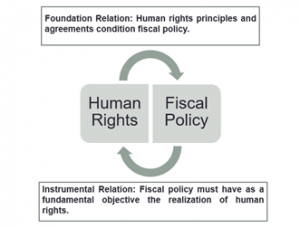 Elaboration: authors, inspired by Chaparro (2014) and Principles and Guidelines (2020)

Like all public policies, fiscal policy is subject to the principles and obligations from international human rights law. Far from establishing specific fiscal policies, human rights obligations and treaties set certain limits on States’ discretion when formulating such policies (IACHR, 2017). These obligations compound a series of parameters and guidelines which are applicable to fiscal policy, including the following: protection of minimum core content, use of maximum available resources for the progressive realization of rights; prohibition of retrogression on the achieved levels of rights enjoyment; non-discrimination; transparency, social participation and accountability (CESR et.al., 2015; David, 2018).

At the national level, this connection has to do with the relationship between constitutional law and tax and budgetary institutions. Budgets, for example, must be seen as an instrument for the realization of rights and not as one to undermine or put a cap on them (Corti, 2011). In addition, the budget as a space of conflict between multiple social interests, is also susceptible of being challenged in the courts in order to do a constitutional review of decisions taken by executive and legislative branches. On the revenue side, regressive tax systems have been challenged in the courts in some jurisdictions; and on the expenditure side, courts have also reviewed allocative choices from a constitutional standpoint (Chaparro, 2014).

According to the Instrumental Relation (fiscal policy – human rights), fiscal policy is a key tool for rights fulfillment and its classic functions should be reinterpreted with a view to achieving the full realization of human rights. Regarding the distributive function of fiscal policy, for example, taxes should be levied according to a taxpayer’s ability to pay. The tax system should contribute to reduced inequalities while mobilizing adequate resources to respond to social needs. Public spending, on the other hand, can provide basic means for a decent life for all. Regarding the allocative function, choices about where to allocate public resources impact on the guarantee of rights. Hence, fiscal policy should create adequate incentives and provide public services to secure rights. Regarding the stabilizing function, fiscal policy can ease cycles and prevent crises that negatively impact on the enjoyment of human rights.

An economic crisis tends to undermine several rights, especially when austerity measures are adopted. Amidst an economic crisis, for example, governments should consider spend more – not less – on the right to health, since in these periods people resort more to public health systems due to the reduced capacity to pay for private health insurance and to increasing health demands as a consequence of economic strain (Guidolin, 2019; Vieira, 2016). As the former Independent Expert on Debt and Human Rights, Juan Pablo Bohoslavsky, pointed out in the UN’s Guiding Principles on Economic Reforms endorsed by the UN Human Rights Council: “[…] it is precisely during these periods [of economic and financial crisis] that the population – in particular one who is devoid of rights, lives in poverty or is at high risk of falling into poverty – feels the greatest need for the State to commit to its obligation to respect, protect and fulfill human rights” (UN, 2018, p. 5).

How much the State collects, the choices of public resource allocation and the execution of the public budget impact on the fulfillment of rights. In order to take human rights seriously with regard to fiscal policy, it is necessary to consider resource constraints, but it is also important to challenge unjustifiable governmental excuses for not complying with their obligations to mobilize the maximum resources available for the progressive realization of rights (Chaparro, 2014).

It is true that, given a fixed amount of public resources, trade-offs will arise: money invested in the fulfillment of some rights might not be available for investing in others (Stephen Holmes y Cass Sustein, 1999). However, on the one hand, the limits for public spending are often artificially defined. As shown by the Covid-19 crisis, governments can mobilize resources from different sources to address pressing social needs. Both, in times of abundance and constraints, there are options for expanding fiscal space without harming economic growth that are often dismissed because of the prevailing dogma of austerity (Ortiz & Cummins 2019). On the other hand, the distributive conflict around the budget is often hidden: trade-offs are not only between key rights investments but also between these investments and unnecessary expenditures, such as inefficient tax benefits (indirect public expenditure) granted to corporations and high-income people. In Brazil, for example, there are no limits for deductions for health expenses from the personal income tax, while resources for public health have been progressively reduced (Ocké-Reis, 2018).

Beyond the legal recognition of rights in the letter of the law, it is in resource mobilization and allocation where States’ priorities are truly shown. Fiscal policy is as important as legal recognition or adjudication for the fulfillment of human rights (Chaparro, 2014). Constitutional commitments with human rights should be reflected in sufficient and fair tax systems and budgets. When a government decides not to implement what was legally and democratically decided, by not doing budget execution, it undermines the legitimacy of public policy implementation that is essential for the realization of rights (David and Cunha, 2013).

In addition to the theoretical task of clarifying the links between fiscal policy and human rights, there are action-oriented efforts to strengthen these links in practice. The Initiative for Human Rights Principles in Fiscal Policy (comprised of seven civil society organizations in Latin America) seeks to develop and promote a compendium of Principles and Guidelines that synthesize human rights standards applicable to fiscal policy by governments and financial institutions (Principios y Directrices, 2020). The compendium translates the general human rights principles into more concrete guidelines for policy makers and technicians.

INTER-AMERICAN COMMISSION ON HUMAN RIGHTS. Report on Poverty and Human Rights in the Americas. OEA/Ser.L/V/II.164. Doc. 147