Review of J. Maesse et al. (2022) “Power and Influence of Economists: Contributions to the Social Studies of Economics” 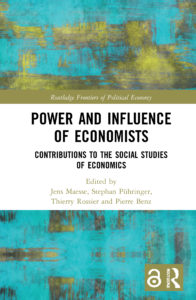 This volume reflects upon the multifaceted relationships that exist between science and society – a domain in which economic experts play a very influential role and often have a direct impact on society by and large. It offers complex insights into the forms of power in economics and provides a broad overview of recent developments in the evolving field of social studies of economics. The book comprises 14 chapters, which are grouped into four main parts: a) Economic knowledge and discursive power; b) Economic governmentalities; c) Economists in networks; d) Economics as a scientific field. Each chapter takes a detailed view on the multiple dimensions of power, action and impact with reference to economics.

Among several notable accomplishments, the volume brings forward two themes that have been singled out in this review, as they are of particular interest to social scientists and, thus, worth commenting on. On the one hand, it provides evidence on how some countries have become laboratories for economic experiments, for instance in the application of the politics of austerity orchestrated by influential economists and policy makers. On the other hand, the book shows that economics is a field of power in which powerful networks play a role in determining who may be publicly recognized as a successful economist, i.e. an expert worth reading and listening to, and, by contrast, identifying those who shall not enjoy such attention among colleagues or such visibility in mainstream media.

Let us begin by considering the first perspective. The paper “Feelings in crisis: the emotional and affective dimension of neo-liberal economics in Greek crisis prone society” by Elena Psyllakou focuses on Greece, in particular on the ways in which the long-lasting crisis experienced by this country in the aftermath of the global financial crisis paved the way for political strategies and governance practices inspired by the neo-liberal doctrine. According to Psyllakou, Greece experienced a peculiar type of neo-liberal governmentality, where any counter-discourse in which ‘emotional and affective failings operated as a key to the imposition of the new political project’ (p. 109) was put aside.

Another interesting case study is that of Italy – a country investigated by Gerardo Costabile Nicoletta in his paper “Laboratories for economic expertise: lay perspectives on Italian disciplinary economics”. Drawing upon various strands of critical studies, the author analyses various historical instances in contemporary Italy, which are considered as ‘laboratories of economic expertise’ (pp. 127-128 and elsewhere). Costabile Nicoletta is particularly effective in showing that economists’ discourses in Italy have played a crucial role in national structural reforms both in the centre-right and centre-left government coalitions. Furthermore, the 2010 government led by the Italian economist Mario Monti (President and former Rector of Bocconi University), which was labelled as a ‘technical government’, is considered a quintessential example of the ‘economists’ role in aligning national governmental agendas with transnational economic imperatives’, thus corresponding to the ‘representations of the economy as a zone neutral and separated from social claims, to be managed by technical measures that are guided by economic experts’ (p. 132).

The paper by Costabile Nicoletta also shows that, compared to other European countries, the ‘Italian neo-liberal experiment’ was considerably more successful in ‘disciplining’ political classes in Italy and aligning workers’ institutions with the government’s neo-liberal agenda.

This book’s second major contribution is its ability to show the extent to which contemporary economists have been actively engaged in powerful networks between  academia, politics and the media. By employing social network analysis on a dataset of the most influential economists in Germany, Stephan Pühringer and Karl M. Beyer in their article titled “Who are the economists Germany listens to? The social structure of influential German economists” demonstrate that, in Germany, the circle of most influential economists is constituted almost exclusively by male economists. Among other things, the contributors conclude that influential German economists have a rather high number of connections with research institutes, think tanks and public governance bodies operating at an international level. Ultimately, influential German professionals economists and policy advice economists appear to also have substantial connections to the ‘German conservative, ordo- and neo-liberal institutional network, which, in turn, is closely connected to the German economic mainstream’ (p. 164), something that puts into question their claim to analytical objectivity.

Finally, in his paper “Are there institutionalized pathways to the Nobel Prize in economics?”, Philipp Korom analyses bibliographic data of 81 Laureates by means of a sequence analysis, thereby investigating the Nobel Prize in economics. Korom essentially shows that ‘publications in the most prestigious journals, socialization in the top departments of the discipline, and receiving the Nobel Prize produce a circle of interdependencies’ (p. 210). For instance, achieving publications in leading journals, such as the American Economic Review, is a precondition for tenure in the best university departments (most of which are located in the U.S.). Thus, tenure at prestigious university departments seems to be the fundamental requirement for reaching ‘the apex of eminence represented by the Nobel Prize’ (p. 210).

Korom also convincingly argues that in several cases there exist master-apprentice relationships between Nobel Laureates. A notable example discussed by Korom is that of the American economist Kenneth Arrow. He mentored graduates who became Nobel Laureates themselves, namely: John S. Harsanyi, Eric S. Maskin, Roger B. Myerson, A. Michael Spence and Joseph E. Stiglitz. On the other hand, however, the author observes that the conclusions emerging from his study do not help in explaining why some economists who were at the pinnacle of economics, such as Joan Robinson or John K. Galbraith, were not awarded the Nobel Prize.

The volume “Power and Influence of Economists” is an informative and at the same time intriguing read for scholars of heterodox economics, network studies, sociology of economics as well as studies focusing on economic ideology and economic discourse. It shall also serve as a useful reading for mainstream economists, constituting a precious and unavoidable moment of self-criticism.

Selected quotes from the volume

Many economists from these elite networks obtain powerful positions within academia, and many of them move on to work in banks, international organisations, governments and central banks. Symbolic power is not attached to a single position in these kinds of networks. It is rather a structural effect of the entire network, and in discourses it can be easily attached to any sort of economic statement (Jens Maesse, p. 32)

…economic science does not foster a reflection upon its own existence and meaning either. At least in the context of higher education, future economists do not typically become confronted with reflexive subjects, such as the philosophy, history or methodology of their discipline. That is to say that although students become highly involved with the curriculums’ requirements, the reason and deeper meaning of these requirements remain unquestioned. This void certainly leaves open self-reflexive questions concerning the identity of future economists themselves as well (Lukas Bäuerle, p. 53)

Economics generally excludes empirical analyses of how the soft market power of marketing is exercised. Using Foucault’s concepts of power offers a fruitful way of analyzing marketing as an exercise of power, which implies that competition must be defined in terms of power. The competitive power principle consists of describing how competition and tacit collusion are indirect forces that stem from competitors using power technologies to interfere with a mutual target of customers (Flemming Bjerke, p. 104)

The Mexican crisis revealed the ideological struggles between experts within the single party. Economists inspired by developmentalism and dependency theory, and trained at Cambridge University, fought against the growing influence of orthodox economists educated at Yale, such as Jesús Silva Heozog Flores and Miguel Mancera, who finally came to power when President Miguel de la Madrid was elected in 1982… Elite groups thus opposed each other within an institutional frame that circumscribed the field of power between those governing the state and those representing private power (Johanna Gautier Morin, p. 173).