Federico Caffè: the man, the teaching, and the intellectual path

By Nicola Acocella and Mario Tiberi

Federico Caffé was born a century ago. He left home voluntarily in the night between 14th and 15th April 1987 and disappeared, leaving no trace behind. For weeks and weeks his relatives, friends and pupils helped the police to search for him. No body has ever been found.

Since then a number of initiatives have been undertaken to honour and remember him. There has been a film and a book on his life. A series of annual lectures in his name has been established. They are jointly sponsored by the Department of Economics and Law, Sapienza University of Rome, where Caffè held a chair from 1959 to 1987, and the Bank of Italy, where he served for many years in different positions. The lectures are delivered by famous economists, including Nobel laureates, and are published in a special Cambridge University Press series.

Who was this economist so sorely missed and fondly remembered by so many Italian economists of the later generations? 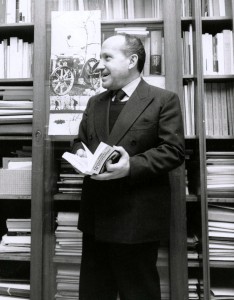 Federico Caffè was generous, reserved and shy, humble yet proud. The heightened awareness and wit that set him apart, led him not to isolate himself, but rather to look around and to share in others’ problems. Moreover, he was unusually ready to accept other people’s points of view, despite his well-known wrath, which he recognized as his deadly sin.

It was this aspect of his character, reinforced by his clear conviction as a scholar, which led him to interpret his profession of public employee in the fullest and most active manner, with working hours that he – euphemistically yet hinting at his social interests (see below) – likened to those of a  metalworker. Caffè’s character is reflected in his works, which were often of a seemingly subdued tone, yet exhibited a polished, scholarly, and rich prose. The wealth of quotations, fruit of a vast culture and an unremitting drive for new knowledge, was more than a habit; it was an act of humility and respect for the reader, whom he believed should be protected from superficial claims unsupported by others’ meditations, ignorant rediscoveries, as well as from the alarmist tones and pressures of vested interest groups.

His generosity led him to express, even in scientific works, deep sympathy for the problems of the poor, the unemployed and the marginalized. He strongly believed that value judgements serve a useful role in the accumulation of knowledge and that the scholar’s necessary effort to be objective consists in explicitly declaring his ideals, rather than introducing them surreptitiously or repressing them.

This backdrop of generosity and openness formed the premise behind his course on Economic Policy, which he continuously revised and enriched. Students unaccustomed to pluralistic views and unaware of the influence of value judgements sometimes found his approach a little confusing, being used to uncritically accept economic theories as objective truth. His consciousness of the subjective component in economic science, however, did not translate into biased instruction. In fact, the fear of indoctrinating his pupils was always so strong in him that there were hardly any cases of him revealing his thoughts about contemporary issues to his students.

Caffè believed in university education for the masses, overseeing the students’ progress at all stages. If his ability as a “talent-scout” – which was one of the few things he allowed himself to be complacent about – made ​​him appreciate the most gifted, his awareness of being able to contribute to individual and social progress led him to be helpful and “compassionate” with others as well, especially with students from more humble beginnings.

His teaching, however, was not limited to lecture halls. His was a kind of permanent school, for various educational levels, which made use of a great variety of instruments, some of which, such as the translation of scientific works or production of essays for a wider audience, were meant to broaden the range of scholars and readers of economics. A particularly noteworthy example of his work outside academia were Caffè’s very successful educational activities at various trade union premises.

Awareness of concrete problems and open-mindedness to the most innovative contributions brought Caffè to foster Keynesian studies and become an advocate of these new theories; this was in the early 1950’s, a period in Italy where pre-Keynesian theories were the accepted norm. His attention to the works of economists such as Kaldor, J. Robinson and Kalecki attested to his appreciation for some fruitful developments of the effective demand approach, although he maintained that the timeless Keynes’ message has also been “a world view that commits to the human responsibility the chances for social improvement”.

Caffè has been one of the main proponents in Italy of the study of welfare economics. It allowed him the means to dissect the virtues and failures of the market at the most abstract level, for the enhancement of the public agenda. He loved to define this methodological approach, having its roots in the contributions of Sidgwick and Pigou, as the logic of economic policy.

The analysis of coherent rules and the techniques necessary to create a unified design of government policy is the last logical step of Caffè’s intellectual path, which had begun with perceiving and examining concrete problems. A necessary guide to consistent action was thus needed. In preparing for didactic purposes the Italian edition of Science and welfare in economic policy by Zeuthen, Caffè came in contact with the intellectual environment and programming experience of the countries of Central and Northern Europe. In Scandinavian countries and in the Netherlands a “theory of economic policy” had emerged through the investigations of Frisch, Tinbergen, Theil, Hansen and others. This aimed at ensuring effective public action, thus complementing the implications for positive public action deriving from the logic of economic policy.

The theory of economic policy and the very possibility of successful government intervention in the presence of rational expectations was later questioned by the Lucas critique. Caffè had however suggested an idea of economic policy in strategic terms, as the interaction of different social subjects (not only the Government, but also big firms and trade unions). This idea of economic policy as the outcome of such an interaction was later to become the ordinary way of dealing with policy action. More recently, it has been developed  by some of Caffè’s followers, to become the core of the new theory of economic policy, exempt from Lucas critique, as it incorporates the assumption of rational expectations.

Not infrequently, his writings denounce the drift, sometimes silent and gradual, of domestic and international institutions. The latter have long acted against the Keynesian suggestions for avoiding a deflationary set up. In addition, sometimes they had also an arbitrary basis at least for some years, being the product of technostructures unauthorized by the bodies in charge of modifying the statutes of those institutions.

This was the case, e.g., of the decisions by the IMF to grant financial resources to member countries for deficits in their balance of payments due to capital movements or to “condition” grants on adoption of tough monetary and fiscal policy as well as structural “pro-market reforms”. The soundness of Caffè’s objections to the action of the Fund have proved to be relevant from the point of view of later developments of international monetary and financial problems. Indeed, the anticipation of many of the positions of Stiglitz has been underlined by some of Caffè’s followers.

In his later years he confronts the rude revival of the ideas of the fundamental stability, efficiency and equity of a free market economy. He contends that these ideas are expressed with a formal rigour which conceals an analytical impoverishment and assumes essentially the status of a slogan, “repetition providing assurance”. In this he sees an attempt to obscure  the difference between ideal and real capitalism.

His rejection of neoliberal stances is founded on the observation that, not the excess of public intervention nor of public assistance, but their deficiencies are responsible for poor economic and social results.

The “struggle to attenuate the multiple forms of marginalisation of human beings”, is not the fruit of partisan ideas, but stems from his wish to support the improvement of all human beings. This leads him to support the idea of a universal welfare state, not solely for the poor, but as a tool for the well-being of all.

In a work dedicated to economic programming in Italy he cites – without remotely surprising anyone acquainted even minimally with his world view – a passage from his preface to the collection of Einaudi’s Three decades of economic and political chronicles: “The man, to be assumed as the central reference point of economic programming is what Einaudi presents us in pages which should be reread: ‘The man – he wrote – as a sum of spiritual and moral energies, as a force which opposes itself to nature, impoverished for centuries, to corrupting government, to torpid environment, and to surrounding misery’”.

In one of his final works (In defence of the “welfare state”), he makes explicit his ‘fixed points’ as an economist, when he writes: “an economic policy that does not exclude, among the tools to be used, the controls conditioning individual choices; that maintains as undeniable the objectives of egalitarianism and assistance, which are usually summed up in the expression ’the State to be responsible for social welfare‘; that entrusts public intervention with a fundamental role in economic activity”.

[Editor’s note: To read further on Federico Caffè and his influence, see:

Milone L. (2012), At the Roots of the International Monetary Fund’s Difficulties: the Pioneering Contribution of Federico Caffè”, History of Economic Ideas, 20(1): 109-130.