In recent years, Brazil has been a synonym for intense and multiple crises: in politics, in the economy, and in the social domains. Back in the 2000s, the country’s landscape was very different: a model for public policies, which were distinguished by their capacity to reach the poor and by providing governance features adapted to a third world context. Because of that, Brazil explored new areas of foreign policy by enhancing International Cooperation and Development (ICD). A characteristic in this type of cooperation is the presence of solidarity as a principle to face the dilemmas and inequalities generated by capitalism (MILANI 2012). Observing the positive context of Brazilian ICD policies in the 2000s, “national interests were structurally brought into conformity with ICD objectives (starting with the Zero Hunger initiative that eventually gained international recognition for their significant results in fighting hunger and poverty)”. (SILVA and ALMEIDA FILHO, 2020, p. 39).

Nevertheless, after 2016 this scenario changed drastically driven by a political crisis (the impeachment of the former president Dilma Rousseff), and an economic and social crisis (severe fiscal adjustment, when approved by the Constitutional Amendment 95), which structurally decreased resources available for ICD and consequently limited possibilities to continue deepening international cooperation.

After the Covid-19 pandemic outbreak, the situation deteriorated further, with disastrous consequences for Brazil’s international engagement. The social effect is seen by the fact that 27.4 million people in Brazil live on less than R$261 a month (approximately US$48), the highest extreme poverty rate in a decade4.

This article aims to explore the preliminary effects of these crises on Brazilian foreign policy, focusing on changes in the role of ICD and its consequences.

To analyze the preliminary consequences for cooperation of changes in Brazil’s politics and economy  , we conducted a delimited and contextualized qualitative questionnaire about the perceptions of specialists in International Relations (IR) regarding the Brazilian Foreign Policy and the ICD. We collected answers regarding Brazil’s foreign policy advances and setbacks in the last 20 years, comparing two distinct periods (2000-2010 and 2010-2020).

The anonymous questionnaire was constructed through an online survey and answered by IR professionals in April 2021. All interviewed had at least one year of professional experience in (or with) the Brazilian government. The 13 questions were divided into three groups: a) professional trajectory and direct or indirect experiences with the Brazilian government; b) an individual evaluation regarding the Brazilian foreign policy in the last decade (2010-2020) compared to the previous decade (2000-2010) and c) an individual evaluation about ICD evolution over the given periods.

We reached sixteen (16) professionals with different experiences. A significant portion of the interviewees had between 11 to 20 years of experience in international cooperation (37.5% of respondents) and 75% of them had professional experience with the Brazilian government, especially between 2010-2020. With regards to the professional relationship with the Brazilian government, most respondents had experiences in different positions (or multiple answers): as commissioned position (4), as a public servant (5), as academics (5), as diplomat (1) and as a member of an international organization team (9). Furthermore, some professionals had provided external technical assistance and private services.

Regarding the professional experience, 8 of respondents worked in ICD projects that involved the Brazilian government between 2000-2010. Considering a scale from 0 to 5 (with 0 being a terrible experience, and 5 being excellent), half of them evaluated their experiences as very good. When the same question was oriented to the following decade (2010-2020), the respondents also pointed out their experiences were very good (4).

Four (4) out the sixteen (16) respondents had experience working for ICD projects that involved the Brazilian government in both periods (2000-2010 and 2010-2020). Those were professionals with extensive international experience (11-20 years), most of them having worked in international organizations. In this group, the evaluations of their experiences were positive and coincident in both decades (5 – excellent or 4 – very good, on a scale 0 to 5).

When asked to compare the Brazilian foreign policy between 2000-2010 and 2010-2020, using a scale from 0 (equal) to 5 (completely different), more than 90% of them believed that foreign policy conducted by the Brazilian government between 2010-2020 was very different from the previous decade (4 and 5). When requested to give reasons to differences in perceptions, the answers highlighted the reduction of Brazilian international prominence with international organizations, quality changes in Brazilian international discourses – including official diplomatic representation – and the recent upsurge of a populist posture much less favorable to human rights guarantee when compared with the previous period (2000-2010).

We also asked participants to react to the affirmation that “Brazilian foreign policy between 2010-2020 was excellent when compared to the previous period (2000-2010)”, using a scale from 0 (strongly disagree) to 5 (totally agree). Figure 1 shows that more than 60% of them partially or totally disagreed with the statement. Nobody agreed or totally agreed. 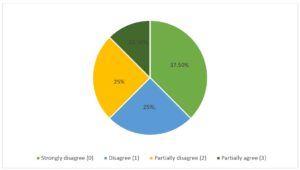 Exploring the previous question, professionals were asked to list the main changes (positives and negatives) of Brazilian foreign policy in 2010-2020 compared to the previous decade. Except for three (3) respondents, participants stated no positive changes over the past decade. However, some exceptions were: a) 2010-2015 as period of projects carried over from the golden years of former president Lula’s diplomacy; b) the end of political alliances with left autocratic regimes such as African and Asian dictatorships for ideological reasons in 2016 and c) the trade agreement between the European Union and Mercosur in 2019, with potential to increase bilateral trade and investments.

We also formulated open questions about the perceptions on changes in Brazilian foreign policy and all participants mentioned negative changes, which included: a) the reduction of the country’s international role and its capacity to dialogue with governments and international organizations; b) the change in Brazilian diplomacy posture regarding basic human rights and sustainability (such as the denial of the Paris Agreement); c) the loss of a leading role in MERCOSUR and BRICS; d) the aggressive approach towards China and the total alignment with the USA and Israel in international security and middle eastern conflicts and; e) the excessive focus on trade agreements, leaving aside other types of international cooperation matters, especially ICD initiatives.

The last section of our questionnaire presented questions regarding the perceptions about Brazilian performance in the conducting of its international agenda during the COVID-19 pandemic. We asked participants to evaluate the statement: “During the coronavirus pandemic, Brazilian foreign policy is contributing to the fight against virus dissemination, for example: agreements for purchase of supplies and vaccines (on a scale 0 to 5, where 0 means totally disagree and 5 totally agree)”, the answers were massively negative. More than 80% (13 out 16) totally disagree with the statement. Just one of them partially disagreed, due to the country’s participation in the Covax Facility International Consortium, coordinated by the World Health Organization (WHO)5. Even with the delay to close the deal, the respondent found the closing of the agreement sufficiently positive to moderate a more negative evaluation over Brazil’s international performance.

Lastly, when requested to explain aspects of Brazil’s management, a negative judgement of the efficiency of the foreign policy was clearly highlighted. Among other statements, respondents mentioned: a) the denial of the pandemic’s severity and of the importance of preventive measures; b) the delay in the acquisition of vaccines; c) the poor national coordination on controlling the entry/exit movement from national territory; d) the insufficiency of efforts to establish dialogue and negotiate channels with foreign governments and international organizations to make viable the effective measures to control the spread of the disease and, e) the absence of partnerships with BRICS and Southern Cone countries to deal with common challenges.

The qualitative perceptions from international relations professionals about Brazilian foreign policy and ICD over the last two decades indicate a dangerous decline in Brazil’s role in the international arena. One of the main effects is the disarticulation of a potentially positive structure able to deal with international crises, which demand global coordination.

1 The authors acknowledge all participants in the online survey.

2 Professor at Anhembi Morumbi University. PhD in Economic Development, Space and Environment at UNICAMP. Post-doctorate in Economics and International Relations at UFU. E-mail:pandrade.eco@gmail.com